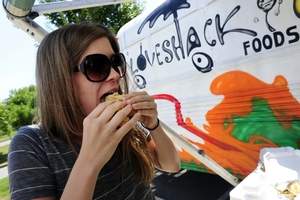 By Steven Hale | The City Paper

The Metro Traffic and Parking Commission on Monday afternoon reopened discussions on the regulating of food trucks in Nashville — focusing on downtown yet arriving at no conclusions for a second consecutive meeting.

A full house in attendance at the M.H. Howard Conference Room watched as the commission took public feedback regarding the trucks — which have garnered attention lately from bricks-and-mortar restaurateurs. While no regulations were finalized, the meeting served as the first opportunity for public comment on the first draft of regulations, posted Aug. 23 on the commission’s website.

Early during the public comment segment, a Tennessee Hospitality Association representative announced that the association’s board of directors had voted to allow food trucks to join its ranks and that the association would continue to be involved as the commission works out the details of regulation.

With the draft of possible regulations providing a general framework, the discussion focused primarily on the prospect of a mobile food presence on Nashville’s busiest downtown streets. A presentation of the regulations as proposed in the draft featured pictures of an evening’s crowded Broadway sidewalk, as one commissioner expressed the commission’s hesitation about adding to the congestion.

Brick-and-mortar voices at the meeting were much more certain on that point. Buddy Messer, who owns three downtown locations, raised concerns about safety as well as fairness, citing the high cost of doing business downtown. One man added that with space for parking and loading already scarce, allowing mobile vendors in the heart of downtown would be “insane.”

Tom White, an attorney representing The Arcade, said it would be hazardous to allow mobile vendors in that area and echoed concerns about fairness. He said the commission should not be “anti-competition,” but should be sensitive to those with a “fixed overhead.”

On the other side of the table, Nashville Food Truck Association president and Riffs Fine Street Food owner B.J. Lofback said his side was very pleased with the draft regulations as a first step and that the association would be submitting some recommended changes. Lofback repeated previous statements, expressing the desire of mobile food vendors to get along with their brick-and-mortar cousins.

In an interview with The City Paper in late August, Lofback said he understands why many don’t want Nashville’s tourism center crowded with food trucks, but that his association’s members would like to operated on the fringe of the city’s nightlife core.

Commissioner Brenda Sanderson, the owner of a brick-and-mortar restaurant, recused herself from discussing or voting on the issue at the start of Monday’s meeting. Since the commission’s last meeting on Aug. 8, some have been calling for Sanderson to do so.