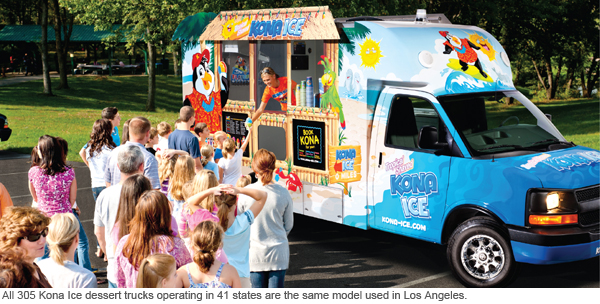 Proactively designing its dessert trucks to stay ahead of increasingly stringent municipal health department rules is helping Kona Ice grow nationally, according to the brand’s founder and president, Tony Lamb.

Lamb decided that if his Florence, Ky.-based franchise was going to sell shaved ice and other desserts in any community, the trucks would have to pass muster in one of the country’s toughest cities for health code regulations: Los Angeles. Now, all 305 Kona Ice dessert trucks operating in 41 states are the same super-compliant model used in Los Angeles — a move meant to help ensure compliance no matter which rules the company’s trucks encounter in the nationwide patchwork of health codes

“A couple years ago, I thought we needed to create a governing body inside mobile-food vending to bring these people together and have a synergy across the country, but I don’t think that business model works for a traditional food truck with 30-percent food cost,” Lamb said. “It would be hard to capture the dynamics. Mine’s a different deal, because it’s a dessert truck with low food costs and massive branding.” 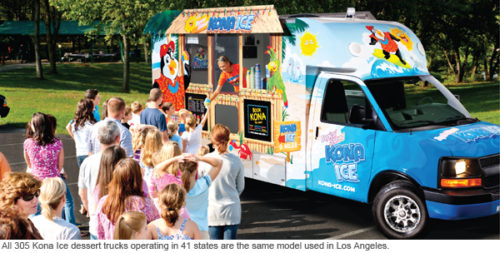 Communities often want a local operator to open a Kona Ice truck — often citing the franchise’s local-fundraising model for schools and sports teams as a key draw — but occasionally get in their own way when well-intentioned laws have unintended consequences, Lamb said. He spoke with Nation’s Restaurant News about the value of being proactive when managing a food truck.

To be a nationwide food truck, the patchwork of health department regulations from town to town or state to state must be the biggest obstacle to your business. Is that the case?

It has been the absolute back-breaker of the company. We’re in 41 states and 44 of the 50 biggest markets, and they’ve all got a myriad of different [regulations]. One place said we had to have a 4,000-volt water heater, and you can’t do that on a 12-volt truck. Ours is top of the line, but they either don’t understand or don’t care, and they’re just trying to check off a box [on their inspection].

We went to NSF International and had their engineers come in and audit the entire truck, from the floors to the freezers and sinks, to the serving area and cabinetry. You can’t imagine what that cost, and you have to pay for a recertification every year. But when we pull into any new market, and you can say everything’s NSF-compliant, it does a lot of good for you. We’ve taken our certification of the truck, down to the approved matting, to go beyond the tightest regulations we’ve seen. We used to build three kinds of trucks: California, Los Angeles and the rest of the country. So we went in and asked what Los Angeles was asking us to do, abided by those guidelines, and now the rest of the country seems to come in line with those.

What are some of the hardest places to open? Are you getting new opportunities now that your trucks are super-compliant?

I would say Los Angeles; Houston; Suffolk County, N.Y.; and Cook County, Ill. — they blocked us for a couple years in Chicago.

I think the New York market doesn’t want you there, and they make it so difficult that sometimes it’s not worth it. Once they realize we’re not going away they’ll start working with us, but those first four or five phone calls were rough.

I think there are a lot of great people out there that just want the absolute best for their towns, but they’re entrenched and just don’t want to fool around with you. There are already a lot of food trucks doing business out there, and it’s easier to regulate it heavily so that when an operator comes out of the process, it’s legit. I think most people just can’t afford to get there.

Now, after a couple of years, we’re in Chicago and Long Island. But I had to walk away from 20 prospective franchisees in New York. When they would call, I’d ask, “How thick is your skin?”

Have you benefited in any way from the bar being so high in terms of the health code?

I say this tongue-in-cheek, but we know that the bigger the obstacles, the less competition we’ll have when we get there, and that’s the advantage of buying into a franchise that makes sure we take care of what we do. I can’t imagine an independent going into Cook County, Ill.

I don’t want to say anything derogatory about government officials, but there’s a lack of outside-the-box thinking and flexibility. I’m not opposed to regulation as long as it’s intelligent. A lot of the ones we fight don’t make sense, but if it’s an intelligent rule, then the customer benefits and the small-business owner ultimately benefits because it keeps out the riff raff.

Sometimes this can be a great relationship. I partnered with my local government here in Boone County, Ky., when they were trying to do a community movie night. I helped them with the expenses and the advertising by buying the movie rights and putting the news up all over my social media pages. We grew it to 800 people on a Friday night, and now it’s an event that I want my trucks at. If I’m paying for the movie and handing out coupons for free popcorn from my truck, and if my customers are then buying more Kona Ice, then I’m doing well and so are they.

With your trucks’ low head count, are you less worried about the employer mandates to be required by the Patient Protection and Affordable Care Act?

My taxes went up $200,000 this year, and my accountant said I could expect to pay another $200,000 on top of that next year. That would mean three more hires for corporate. I’m not a giant conspiracy guy, but I am sick of seeing a lot of waste.

So what should an operator, either in a truck or in a brick-and-mortar unit, learn from Kona Ice’s experience?

Persistence, diligence, compliance — those are canned words, but it’s tough out there. The cost of startup is higher than you think. But I’m on the other side, and I’m glad. Once you get past it all, then I love regulation. It keeps the competition away.