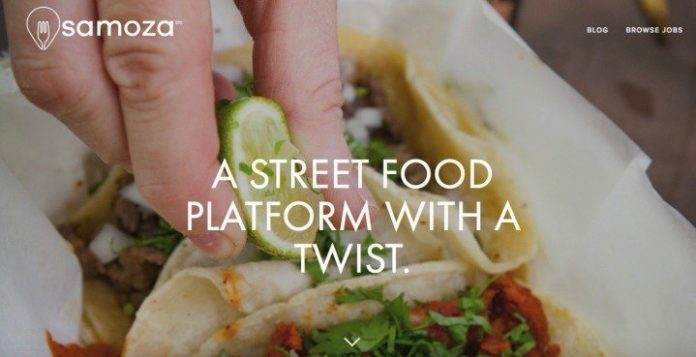 By Kylee McIntyre  |  Tech In Asia

Creative minds know that inspiration can strike at any time, especially when one isn’t prepared. Rohit Gehe found his idea about seven months ago when he got hungry running errands for his dad. His choice kebab shop wasn’t open, and as he wandered the streets on his pilgrimage for food, he found more than just sustenance – he had a revelation while watching a street vendor make parathas outside of his chosen chai shop.

“I was like: How do we find these guys? There’s no possible way online to find these guys. There’re blogs and stuff, but what about real time information?” he remembers. “There’s nothing available, basically.”

Armed with his new idea, he did what any of us would do – he called his friend Armaan Kapoor in his excitement. Neither knew at the time that it would be the beginning of their partnership.

“I came home, I called Armaan, and was basically like let’s do this,” he laughs, and Armaan picks up where he leaves off.

“It’s not only about the consumer. It’s also about the vendor,” he explains. “These vendors are [often] illiterate – they don’t have any formal education, but technology can empower them as well.”

The result, Samoza, is what Armaan describes as a “Zomato for street food.” Launched on January 1 on the Google Play Store, the app maps and allows for reviews of street vendors. It targets students, particularly those around university age who frequent street vendor stalls.

Samoza’s services are concentrated in Bangalore for the moment, which is also where both founders are located. 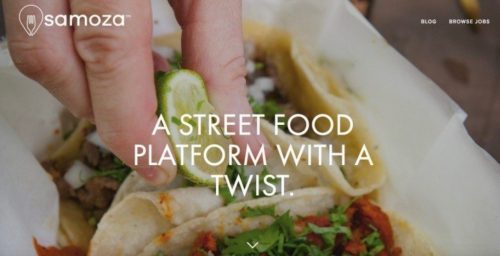 Talking to Rohit and Armaan, both of whom are under the age of 25, about their adventures in the world of startups is an adventure in and of itself. We don’t have video on, and they jump into each other’s sentences a lot and try to introduce themselves before they speak so I can tell who’s talking. Honestly, I have a hard time keeping up. The guys don’t have trouble keeping up with each other, though, and Rohit mentions what I’ve already realized – they have different working styles but complement each other.

“I have no basic regard for time,” declares Rohit, who prefers to work – and works best – in intense bursts. “It’s kind of an issue.” He describes his job, working on the app’s design, as something he does sitting “in the corner” in the morning and late at night. It’s a job that he just kind of fell into.

“We flopped on our designer, but I learned design in a couple of weeks,” he says. “I did that on my own one night, just zoned out for six hours and designed the app.” He adds that the learning curve has been crazy.

Armaan, who is in charge of business operations for the company, has a more standardized take on operations and explains that he thinks more in terms of to do lists.

Samoza is completely bootstrapped at the moment and is only a few months old, but the founders have crowdsourced a lot of the work on the app and have a monetization strategy in place. They plan on looking for funding soon.

“If you actually have the product in your phone, you can put [up vendors] yourself,” says Armaan. Besides factors like the quality of the food, Samoza also includes a crowdsourced hygiene rating with each street food vendor. Users can fill out of a form that takes into account several factors.

Since Samoza has a two-sided approach – both consumers and vendors have to be on board – Rohit, Armaan, and their interns scout the streets to talk to vendors. The app requires real-time location tagging for the vendor, so the vendor needs to be on board.

Rohit says that it sometimes takes a little bit of explaining and convincing for the vendors. “They have come onboard in three to four days, and they kind of have this idea that the tide is kind of shifting, but they have this strange idea of what’s going on,” he says, adding that sometimes it takes extra convincing if the vendor is suspicious that the app might cause them problems.

The business of food 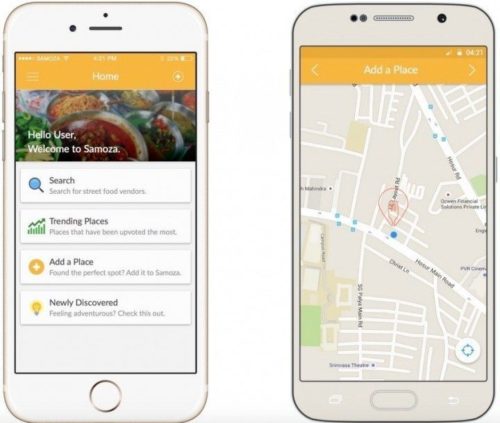 Samoza’s a bootstrapped company that runs on small angel donations and money from family and friends’ money. Its headquarters are currently Rohit and Armaan’s apartment, but they seem unfazed by the startup’s challenges so far. Armaan says that they’re focusing more on speed in the product’s development than streamlined processes right now. That will change in the future, though.

“We have a basic structure that we follow currently…If we can’t do something, then we go out and do it ourselves instead of getting external talent or outsourcing things,” he says. “Everything’s in-house for now.”

There are perks to working from home, though. Rohit, for example, does not only work in food – he also considers himself a foodie and cooks a lot.

“I’m from Bangalore, but originally, I’m from Indonesia,” Rohit says. “My mom’s a great cook, and I’ve always been in the kitchen. Then, I went to uni, and I cooked all the time.”

He begins every morning by asking the whole house if they want breakfast, to which the answer is always yes.

Both founders believe crowdsourcing is the key to the app’s success, and that, along with their research, has shown them the potential to expanding the app through India and into Southeast Asia, particularly into Singapore, Malaysia, and Indonesia, where street food is also an open market. For now, though, they’re a little more than two weeks into their startup app launch, have a plan in place, and apparently are getting home-cooked food every day courtesy of Rohit. There are worse places to be.

“I’ve always wanted to do my own thing, but my favorite part about working at Samoza is that I get to interact with grassroot levels of society who I wouldn’t interact with otherwise,” Rohit says. “It’s teaching me a lot.” Also, he adds, they get to be their own bosses, which is not too shabby.