Food trucks, lunch trucks, food wagons and mobile units–they go by many names, but one thing is clear, they have hit the road running and there is no sign that they are slowing down. Although not a new idea by any means, as food trucks have been around for decades in cities like New York and Los Angeles, the present-day food truck is a high powered marketing, social networking   and branding juggernaut.

Franchisors have taken notice. Traditional bricks-and-mortar chains have introduced food trucks as a supplemental offering, including Jack-in-the-Box, Carl’s Jr., Qdoba and Dairy Queen, while many more concepts are truck-only operations. Food trucks are enticing to many prospective operators because of their relatively low initial investment. Food trucks are also an easy way to test out a market or even a specific location before building a bricks-andmortar restaurant. Trucks also double as traveling billboards, providing valuable advertising for the franchisee and the brand. And trucks are known to generate greater online buzz through social media outlets such as Twitter and Facebook, since these avenues are the lifeblood of the mobile restaurant. Whether a franchisor is an established bricks-and-mortar chain or a mobile-only chain, the decision to franchise food trucks comes with unique challenges that must be addressed by both the franchisor’s developmental and operational people and its legal counsel. 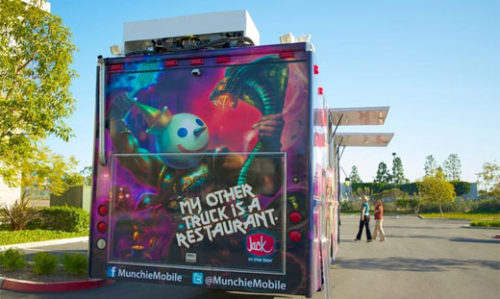 The Franchise Disclosure Document
An ancillary question to the franchise agreement issue is whether it makes sense to have two different franchise disclosure documents. Again, this question is only relevant when the franchisor offers both bricks-andmortar and truck franchises. There are   many factors that should be considered in making this decision. For example, will the trucks use the same marks as the bricks-and-mortar location? (Jack-inthe-Box, for instance, uses the principal trademark “Jack’s Munchie Mobile” for its catering trucks.) Also, similar to the franchise agreement itself, a lot will depend on whether the two offerings are typically made jointly or separately and whether sales efforts will be combined or be independent of one another.

Royalty and Advertising Fees
Regardless of the form of franchise agreement used, a franchisor will need to determine whether the fee structure for bricks-and-mortar restaurants fits the food truck format. If the franchisor determines that a truck will require less oversight, consultation and ongoing training than a traditional restaurant, then it might consider a lower royalty fee. The same goes for advertising fees. The franchisor must ask itself whether it will maintain a single advertising fund for both bricks-andmortar and food truck concepts or keep   them separate. How much would a food truck benefit from traditional advertising, considering that most food trucks thrive on word of mouth and social networking to get the word out?

Social Networking
Social networking truly is the difference-maker for food truck franchises. While traditional bricks-and-mortar franchises have certainly benefited from online marketing, food trucks depend on it to a much greater degree. Unlike traditional restaurants, food trucks are by their nature nomadic. They typically will show up in a different neighborhood each day, so they have the unique challenge of getting the word out on a moment’s notice so their customers can find them on a given day. While some customers will be those who just happen by the truck, without having set out to go there, a food truck business, like most businesses, relies in large part on repeat customers. To attract these customers, they need to be in constant communication with them about their whereabouts. This is where social networking sites like Twitter and Facebook become invaluable. “Followers” are able to know when their favorite food truck is in their neighborhood or will be at a special event. These networking sites also generate buzz through word of mouth, referrals, “favorites” classifications and other mechanisms.

However, along with the benefits of social networking, there are unique challenges that must be dealt with by franchisors. First and foremost, franchisors should have a detailed policy for use of social media Web sites by franchisees and the use of the franchisor’s trademarks in connection with those sites. For example, franchisees should be prohibited from making postings to a social media Web site relating to the brand that are derogatory or disparaging of the franchisor; that is offensive, inflammatory, or indecent; or that harms the goodwill and public image of the franchisor’s system and marks.

Site Selection and Approval
In a traditional franchise agreement, the franchisor typically provides some level of     assistance with the finding of a site for the franchised business and retains the right to approve a site. With food trucks, a franchisor must decide how involved it wants to get with the day-to-day movements of its franchised trucks. Approving locations for all of its trucks on a daily basis would be nearly impossible, so the franchisor must have strict guidelines for finding acceptable locations. For example, trucks may be prohibited from being located too close to a bricks-and-mortar location of the same brand or other food trucks. Some of these restrictions will be regulated by local zoning and permit laws.

Exclusive Territories
Traditional territories granted to franchisees are usually defined as a geographic area or mile-radius around an approved location. The franchisor typically is not permitted to place another outlet in the territory, either direct-owned or franchised. However, with food trucks, there is no single approved location to anchor a territory. One solution is to define an area using geographic or political boundariesrivers, highways, counties, city limits and so forth–within which a franchised truck is permitted to roam. This can get tricky, however, if a city or town is able to support multiple trucks, which may be owned by different franchisees. And what happens when there is a mix of food trucks and bricks-and-mortar locations in the same area? If the trucks are prohibited from setting up within a certain distance of a bricks-and-mortar location, how realistic is it to enforce that on a daily basis? If the franchisor fails to enforce its territorial restrictions, will the affected bricks-andmortar franchisee have a cause of action against the franchisor?

In many franchise agreements, the franchisor reserves the right to offer the same products under the same marks, or license others to do so, using alternative channels of distribution. If franchisors rely on this to place food trucks in the existing territories of its bricks-and-mortar franchises, they should be prepared to receive push-back from those franchisees, and possibly lawsuits, based on the direct and significant competition this would create. Franchisors will need to decide whether   they want to test those waters and also consider how their franchise agreements are written with respect to their retained rights in franchisee territories.

Non-Compete
Because a mobile business, unlike a traditional restaurant, does not have a fixed location, it can be more difficult to enforce a post-term non-compete. Generally, a non-compete will only be enforceable if it is reasonable as to duration and geographic scope. In most franchise agreements, the area covered by a noncompete is a “mile radius” around both the franchisee’s approved location and other franchised and company-owned locations. If a franchise system consists of mobile units, either exclusively or in addition to bricks-and-mortar locations, it becomes difficult to define the geographic scope of a non-compete. A partial solution would be to limit competition within the franchisee’s former territory (and perhaps within a certain distance of the territory). However, since the franchisor’s other mobile businesses do not have fixed addresses, it would be difficult to enforce a non-compete which is based on the proximity to another franchised or company-owned business. Creative drafting of the non-compete that takes into account the structure of the particular franchise system will be necessary.

Food Supply and Preparation
Because of the limited size and capabilities of a food truck, traditional requirements for inventory, food storage and food preparation likely will not work in the food truck context. To maintain uniform system standards, franchisors need to determine how food will be stored and prepared. For example, will truck owners be required to use a bricks-and-mortar location to provide those services, or will the franchisor have special arrangements   with third parties? These decisions should not be left up to individual owners. A franchisor must have a plan in place and ensure that it can implement its plan, with the   necessary flexibility, through its franchise agreement and operating manual.

The success or failure of a restaurant often depends on its location. Food trucks have the built-in advantage of choosing a new location on a daily, or even hourly basis, which allows them to go to their customers instead of sitting idle and waiting for customers to come to them. However, franchising food trucks comes with their own challenges and requires the franchisor and its legal counsel to carefully craft the agreements needed to sustain a mobile franchising system. This article outlines some of the more significant challenges, but there are many others. For example, a franchisor must determine how it will inspect trucks to maintain the system’s cleanliness and sanitation standards; training programs will need to be conformed to the truck business; operating manuals will need to lay out requirements for hours and dates of operation, as well as the franchisee’s ability to participate in special events, such as festivals; and insurance and licensing requirements will need to be modified.

While both existing and new franchisors may want to rush to market with food trucks due to their many advantages and their booming popularity, thorough planning and preparation, and the guidance of trusted advisors, will be essential to their long-term survival.