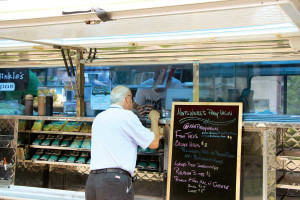 If you live in or by a metropolitan area, you’ve probably seen one wheeling around town. If you haven’t seen one wheeling around town, surely you’ve seen one on TV or being advertised in local media outlets. Food trucks seem to be everywhere these days and their popularity has increased exponentially in recent years, dotting the U.S. landscape from Austin, TX, to Boulder, CO, to Cleveland, OH, and everywhere in between.

Whatever you want to call them, mobile markets, food carts, or purveyors of mobile cuisine, it looks like they’re here to stay.

Mobilizing The Local Trend
Like many aspects of the restaurant industry, food trucks are affected by both agricultural and consumer trends, and one of the biggest trends to hit the food industry in recent years is the move toward sourcing locally grown and seasonal produce. To stay competitive, many food trucks have jumped on the bandwagon by connecting with local growers and are integrating their produce into
their offerings.

In Cleveland, the mobile eatery scene has exploded within last three years resulting in a current tally of more than 80 licensed and registered trucks.

The StrEat Mobile Bistro food truck in Cleveland operated by Izzy Schachner was one of the first trucks to hit the scene in 2010, and as a seasoned veteran, Schachner has had the opportunity to see the industry evolve since its still recent beginnings.

Sourcing locally grown produce is a priority at StrEat Mobile Bistro, and Schachner lists his love of Cleveland and his desire to support the local economy as two major reasons for doing so.

“Any way I could help our local economy was one of my biggest reasons to support local produce.As a byproduct, it’s also about sustainability, the carbon footprint, the freshness, and the quality,” he says.

As far as where he’s acquired his produce, Schachner mentions a local program titled City Fresh, which maintains several urban gardens and operates a CSA program. Additionally, Schachner mentions future plans for cultivating his very own garden filled with herbs and other produce located next to the brick and mortar restaurant he opened this August, and is optimistic. “The good news with the garden is we’re taking over an existing space, all the beds are there, everything we need is there, and everything seems to be really flourishing,” he says.

Another trailblazing truck that got its start when the movement took off in 2010 is Jibaro, run by Elvis Serrano, a self proclaimed “farmer at heart” who started his business through a food truck pilot program in 2009 when there were only three or four other trucks in the city. As with StrEat Mobile, Serrano places an extremely high priority on sourcing local, and says it’s actually much easier to source local now than it was when he began.

“Looking from year one to year three, it was harder for me to find things like kale and mixed greens. Now, it’s a lot easier, I can go to any farmer’s market. There’s a lot more in the greater Cleveland area now,” he explains.

Serrano mentions Wooden Knight Farms (see “Grower Tips On Breaking Into The Mobile Market” on p. 44), whose produce can be found at the Gordon Square Farmer’s Market just west of the city’s downtown, as one of his sources. Mixed greens, carrots, onions, and shallots are among the staple items Serrano keeps in stock, and with plans to launch a kale and spinach based smoothie truck in 2014, his locally grown inventory will only increase.

With government initiatives like USDA’s “Know Your Farmer, Know Your Food” program which encourages the strengthening of local and regional food systems, consumer demand in this market appears to be strong and on the rise. According to research from the initiative, local food has been on the top of the National Restaurant Association’s Top 10 Consumers Trends list for the last four years, and the number of farmers markets has increased 67% since 2008.

Serrano says that including local food into Jibaro’s menu was a “no-brainer,” and his instincts for doing so are spot on considering the dollars consumers are shelling out for the trend.