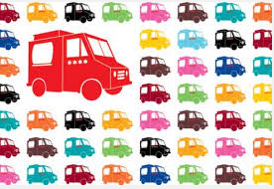 By Bill Dowd   | Notes on Napkins

Anyone who attended last weekend’s very crowded inaugural New York Food Truck Festival at Riverfront Park in Troy might be surprised to learn that, at least in the Big Apple, the food truck business isn’t very successful.

Stefan Nafziger seemed oddly downbeat for a guy watching a dozen or so hungry people line up to buy his falafels.

Three years ago, when it seemed as if food trucks might take over Manhattan, he planned to have a fleet of his Taim trucks dispensing Middle Eastern fare throughout the city. He even got a Wall Street investor. Now, he says, his one truck barely justifies the cost.

I was originally hoping that Nafziger would help me figure out a decidedly New York puzzle. As I was walking through Prospect Park recently, I wanted to find a healthful snack for my son and something for me. The only options, though, were the same sort of carts that my dad took me to in the ’70s: Good Humor ice cream, overpriced cans of soda and overboiled hot dogs sitting in cloudy water.
This seemed ridiculous. In the past few decades, food in New York City has gone through a complete transformation, but the street-vendor market, which should be more nimble, barely budges. Shouldn’t there be four Wafels & Dinges trucks for every hot-dog cart?

David Weber, president of the New York City Food Truck Association, explained that the ratio is more like 25 to 1 the other way. That’s because despite the inherent attractiveness of cute trucks and clever food options, the business stinks.