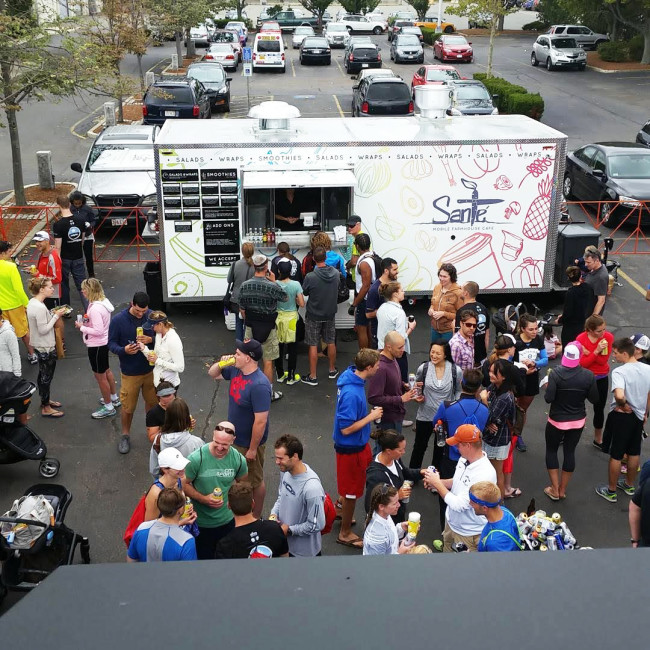 Cousins Steve Gilman and Scott Haviland did not know what to expect when they founded Santé Mobile Farmhouse Cafe, their food truck business, this past August.

“It was a lot of work getting started,” Gilman said. “We had to get together finances, and I had to take a credit on my house.”

Haviland, the executive chef, was looking to expand his culinary art from catering to a wider audience and to work within a different framework. Gilman, an entrepreneur, noticed the trends in demand for food trucks and jumped on the opportunity to launch a startup.

“We both knew that restaurants have an astronomically high failure rate,” Gilman said. “We decided to try something different.”

After forming the idea for the food truck last spring, Gilman and Haviland said they spent the majority of this summer seeking the perfect food truck on which to brand the image of their business.

There was only one problem: The truck was parked in Fort Lauderdale, Florida. Gilman and Haviland spent four to six weeks contacting the owners and planning the logistics of the truck’s roughly 1,500-mile trip to Santé headquarters. Ultimately, Haviland drove down to Florida and towed the truck all the way back to Needham, Massachusetts, where Gilman and Haviland have based their operations.

With the truck procured, the only other major remaining component of the business was the food.

“Scott came up with the menu,” Gilman said. “He has 20 years of restaurant experience.”

The menu offers a wide array of healthy options, including salads, wraps and smoothies, and the truck caters to all types of diets, including vegetarian and vegan. When asked where they found the inspiration for these meals, Haviland said that family influence went into creating each offering — even “the salads I’d made my wife for lunches” are featured on the menu.

The focus of Santé is to create meals that are colorful, fresh and satisfying, Haviland said. “I want to make a healthy, fresh, tasty and cost-effective menu.”

All items on the menu can be altered based on dietary restrictions and allergies. If diners are interested in an organic or vegan meal, organic produce can be added, and cheese can be omitted. Meals can also be made gluten-free.

Elena Joukowsky ’17 lauded the company for its dietary flexibility. “As a vegan, it’s challenging to find food, especially in the food truck form. I love how the smoothies offered here allow me to eat what I want and fully enjoy it.”

By the end of August, Santé hit the road but not without logistical issues. Meeting states’ health regulations and obtaining licenses and permits to sell in towns and at festivals was a challenge, Gilman said.

“Licensing and permits have been the toughest process so far,” he said. “Every time we find a new venue or go into a new city, it’s a very tedious process and a very political process. A lot of these towns have very strong pushes from the restaurants to limit where food trucks can operate. There’s also clean inspections to pass, background checks and letters of recommendation from the police department.”

Santé’s first event was chaotic and new, but enjoyable, Haviland said. “The first day was all about trying to get a feel for the trailer in such a tight space.”

“It was also really chaotic. We made 300 smoothies in just over three hours,” he added. But smoothies are not the most popular item on the menu: “The Sweet Harvest Salad is definitely the favorite,” Gilman said. According to Santé’s website, the $7 salad is made with roasted sweet potato, candied pecans, black currants, tomato, organic goat cheese, organic baby kale and arugula.

“The Kale and Quinoa Salad is popular with the office crowd,” Gilman added.

Ever since the Santé food truck has shown up at festivals and in towns in Massachusetts and Rhode Island, hungry food-lovers have flocked to taste the creative, healthy meals, and lines can reach 15-20 people deep.

Moving forward to the winter months, Gilman and Haviland plan to focus on catering more events, as they predict that cold weather will impede food truck sales.

“As the cold weather is coming and the logistics of operating the truck becomes an issue, people don’t want to stand around outside,” Gilman said. He mentioned that the company is currently working to achieve a profitable plan for winter and will keep the trailer maintained so that when spring emerges, it can seamlessly transition back to the road.

By the end of the 2016 fiscal year, the founders aim to have multiple trucks and to create a consortium of food trucks to hit more festivals and venues. Another major goal is to purchase their own facility with a larger office.

Since its initial event in August, Santé has taken off, seeing higher demand from venues and now partnering with companies to cater lunches and dinners. “The feedback has been overwhelmingly positive,” Gilman said. With higher demand, the Santé food truck goes out four to six days a week and sells to customers all around Massachusetts and Rhode Island.