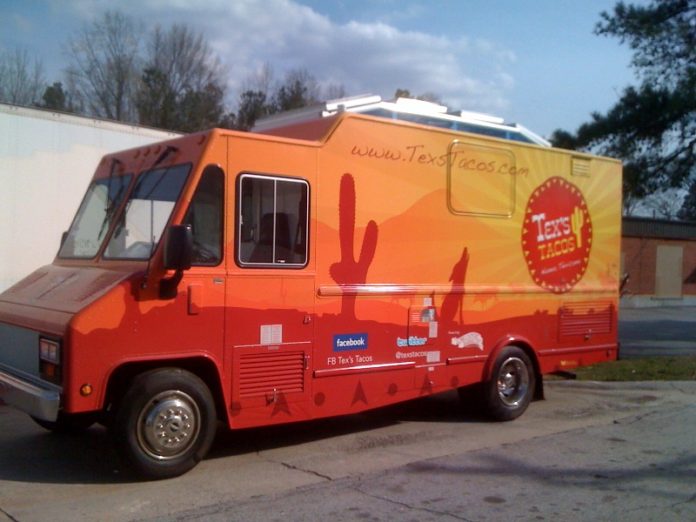 Metro Atlanta will soon have a new option for chowing down on TexMex favorites. Tex’s Tacos is preparing to hit the ground running (cruising?) in a new food truck dishing out tacos, quesadillas, loaded fries and more. The cuisine, which they’ve dubbed “Nueva Texicana,” will focus on fresh, homemade ingredients and updated takes on classics.

Tex’s Tacos began when Atlanta resident and Texas native Mac Helms shared a meal out west in San Antonio with now business partner Harrison Jones. Helms lamented the lack of his Texas favorites in Atlanta and so the idea was born to bring the tacos to the people.

The pair has spent the past six months working with chefs to craft their dishes, dedicating as much as a week to perfecting each individual taco (that’s a lot of taco tasting!). The resulting menu will include some unique items like lime-dusted tortilla chips and french fries, The Texican – an oversized taco with the works, and tacos featuring smoky Low Country BBQ. As you’d expect from a food truck, their prices will be affordable, with tacos ringing in at around $3 or less and the more complex dishes topping out at $5.

Tex’s will serve out of a custom-built truck straight from the thriving LA street food scene, but they’ll also put a unique spin on food truck dining by offering seating in their Buckhead storefront, located on Roswell Road. When they are parked out front (which they plan to do often, particularly on nights and weekends when Buckhead is hoppin’), patrons can order tacos from the truck and then grab a seat inside the festive Southwestern-inspired dining area to enjoy their meal. When the truck is on-the-go, the storefront will be closed and you can find their latest location via the typical social media channels like Facebook and Twitter.

Helms, who spent time studying the food truck habits of other successful street food cities, feels that they’re bringing Atlanta a unique hybrid of the top-of-the-line mobile service seen in LA and the Austin-embraced trend of having a home-base where you can almost always find the truck. Tex’s Tacos is in the final stages of permitting for their food truck operation and hopes to be operational by early April.