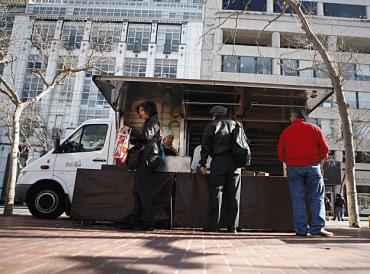 And starting next month, the city will begin implementing new rules to make it easier and cheaper for operators to get a permit. For hopefuls, like Zak Silverman, it’s the perfect time to get rolling on a mobile food business.

For a little more than $3,000 a year, the 25-year-old Oakland resident can get his American comfort food truck, Doc’s of the Bay, permitted for four public locations citywide. His predecessors paid close to $10,000.

Apart from cutting fees for selling on public streets by more than half, the new legislation, approved by the Board of Supervisors in November and effective March 7, makes the Department of Public Works the “one-stop shop” for collecting fees and issuing permits from departments such as public health and fire, said the Department of Public Works spokeswoman Gloria Chan.

Previously, vendors had to have their locations approved by individual police stations, so if they wanted to sell in multiple spots, they had to talk with officers at several stations. Officers issued permits and used discretion on matters such as whether a truck’s product was too similar to something at a nearby establishment.

The process was “excruciatingly difficult,” said Liba Falafel owner Gail Lillian, who gave up on securing public permits after four months and turned to private property and Off the Grid, which organizes and promotes food truck events.

“There was a different police permit officer for every neighborhood, and every officer defined similar food differently,” Lillian, 38, said. “The day I gave up was when I reached an officer who included drinks as similar food.”

The new guidelines also seek to dodge a problem that one food truck faced earlier this year. JapaCurry was kicked out of its location after the nearby soup, salad and sandwich cafe Harvest & Rowe on Second Street objected.

Now, a public hearing process will be required if nearby businesses and residents express concerns over permit details such as location and hours of operation. But some food truck vendors weren’t thrilled with this addition.

“With public hearings, more businesses might raise their voice against us,” said Caroline Hummer, 23, who operates Chairman Bao, a Chinese bun truck that splits its time between public and private spaces. “I’m hoping I’m misjudging, that restaurants in the area will be open to food trucks.”

Vendors who wanted to sell on private property, such as in parking lots, merely had to get a permit from the Planning Department, but that sometimes took months because they were in the same category as brick-and-mortar restaurants. The new law still requires that permit, but it can be issued the same day, because they are considered to be temporary.

Scores of prospective food vendors are expected to attend a Friday workshop on the new guidelines. Among those who plan to attend is Kate McEachern, 28, owner of gourmet cupcake truck Cupkates.

McEachern said she first sold her cupcakes in the East Bay because the permits there were less expensive. With the new guidelines, she is considering expanding beyond Off the Grid and moving to public streets.

“The biggest barrier for us starting out was financial,” she said. “With the new street food-friendly legislation, the financial barrier isn’t as high.”

Tuscaloosa, AL: A Bump in the Road