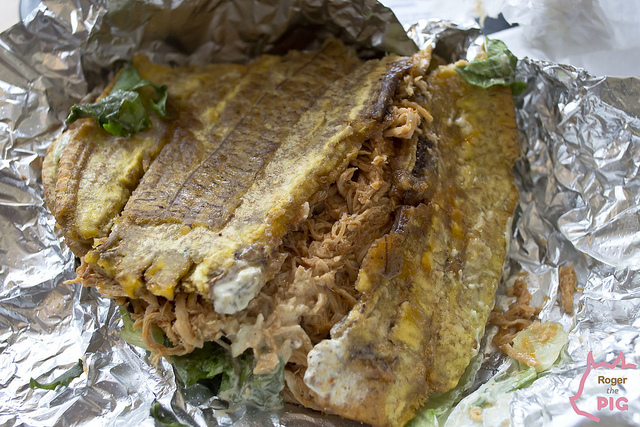 By Roger the Pig  | Roger Eats Like A Pig 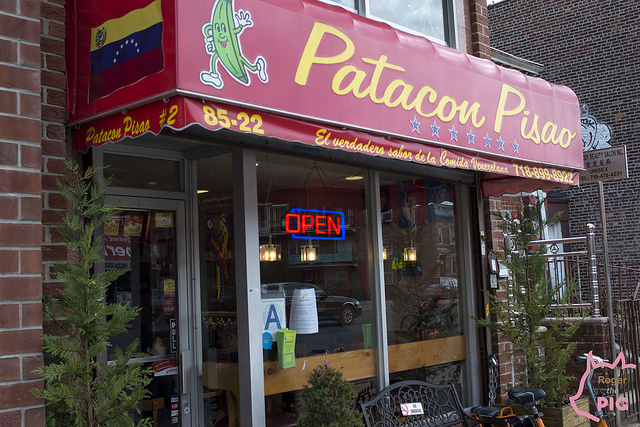 To me, street food is more than just quick filler to stop the feeling of hunger. Street food, even more so than the priciest or fanciest restaurants, gives the best perspective of the mentality behind a country’s cuisine.

It makes perfect sense when you think about it. Street food needs to be authentic and true to the tastes of the locals with no need for delicate plating or appeal to foreigners.

After 19 years of living on the West Coast, my knowledge of Venezuelan food didn’t stretch much past arepas. What a shame really, considering that the country is home to some amazing biodiversity and cultural influences from indigenous people, Spanish settlers and even African ideas.

What better way to remedy that with a healthy dose of Venezuelan street food, right on the streets of NYC?! 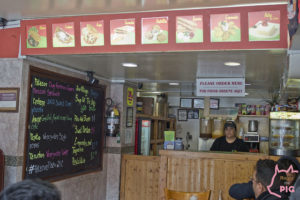 Patacon Pisao started out as a food cart but became so popular that they opened up a brick and mortar establishment to go with their food trucks. They’ve been nominated for the Vendy Awards for NYC’s best food carts several times which gives a pretty good indication of their popularity!

This is Venezuelan fast food at its cheap and delicious best. Everything seems so simple and straightforward, but the synergy in each bite is unexpected and satisfying.

It’s delicious, filling and perfect as that go-to neighbourhood place for a quick meal, but even more so it’s an insight  in a cuisine that doesn’t get the fanfare it should. 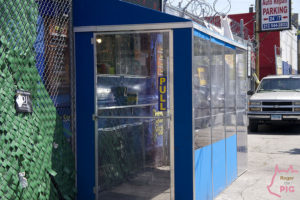 The menu here doesn’t even begin to delve into the intricacies of Venezuelan food, but rather sticks to some basic categories. The offerings aren’t really representative of what might be sold at a Venezuelan street stall, but many elements of the cuisine are retained.

As per their name, Patacon Pisao’s star attraction is the patacon, a sandwich with fried green plantain patties instead of buns! The other main categories for a meal are cachapas (sweet corn cakes), tachuchos (Venezuelan wraps), arepas (corn meal patties) and pepitos (Venezuelan hero sandwiches). There’s also some other small appetizers on the menu like empanadas but I found those to be more general Hispanic foods rather than uniquely Venezuelan.

To be honest, there’s not much to differentiate the main categories as they’re all the same mix of meat, lettuce, tomato and special sauce with some variety in presentation. That’s not a bad thing though when you’ve got the perfect filling down pat!

I first went to their Queens store and asked the nice lady at the counter for her recommendations and she answered with any of the patacons or tachuchos! She definitely wasn’t expecting me to try both but I also didn’t realize how filling each would be! One of these is definitely a substantial enough meal but they’re both enjoyable in different ways. 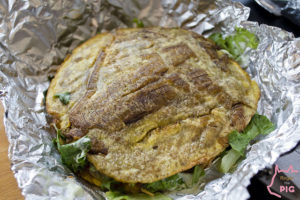 Just looking at the picture makes me crave more of this and I just ate dinner too! You may be tempted to think that switching out the bun for green plantains is the only thing separating this from any other sandwich, but that’s definitely not the case. 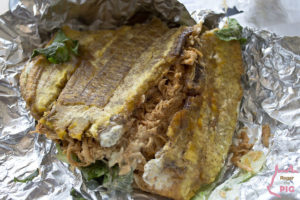 The green plantains ‘buns’ are excellent! They’re literally slices of green plantains cut lengthwise that are pressed and fried into a flat round shape. It does a decent job of holding everything together but I had a few slices fall apart. That being said, messiness almost seems like a requirement for delicious street food!

The idea is derived from patacones (also known as tostones), which are slices of green plantains cooked in a similar manner but served by themselves that are popular throughout Latin America. They’re twice fried for extra crispness and that really came through here! I also loved the slight starchiness that kept the sauce-filled contents from running rampant. 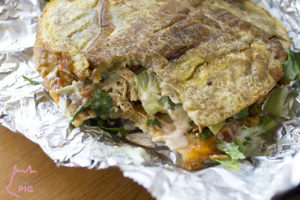 The chicken was wonderful too! It was shredded and lathered with a “special sauce” which was mayo-like in taste and consistency and had hints of chilies, onion, celery, parsley, cilantro and garlic. There was also some ketchup mixed in just like the tasty secret sauce at In-N-Out Burger! Apparently Venezuelans love using ketchup in their cuisine. 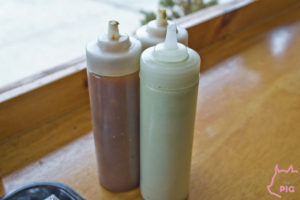 If this wasn’t moist enough alone, the lady at the counter also offered up these extra sauces for added enjoyment! There was a vegetable based mayo sauce, a hot sauce and a pink sauce that seemed like a blend between hot sauce and the mayo.

The vegetable sauce was the mayo component of the “secret sauce”: a bit like a Venezuelan version of a mojo sauce except with less strong of a garlic and onion feel. When taken alone the nuances in the different vegetables and herbs really stood out and gave this a refined and earthy feel. The hot sauce was quite liquid and added a tempered and mild heat.

Looking back now I’m quite thankful I only had one of these before I left New York because I didn’t hesitate to add additional sauce! The vegetable sauce in particular was addictive and if it wasn’t mayo I might just have been tempted to drink it straight up! One could argue that a delicious sauce is a necessary guise to make cheap food taste good, but calories be dammed because this was irresistible!

Add in a token amount of lettuce and tomatoes for some variety in texture and to give a middling excuse to pass this off as healthy and you have a complete and tasty Venezuelan meal in one small package! 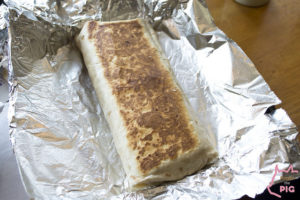 This had many as the same components as the patacon except in a different presentation. One bite later though and you’ll realize that this is no ordinary wrap or burrito.

The gush of molten cheese that came spilling out of the wrap was a delicious revelation! I don’t think I even got any filling in that first bite but it was a special moment nevertheless. I’ve never tried it before, but I’m guessing Chipotle’s legendary/infamous “quesa-rito” concoction would taste similar! 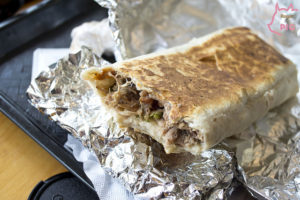 Apart from the cheese layer (which unfortunately wasn’t as plentiful throughout as it was for that first bite), the recipe for success here is pretty consistent throughout. The combination of lettuce, tomatoes, meat and that aforementioned vegetable mayo/ketchup “special sauce” made for a fatty and cheap food mess. If anything, this was even soggier with all the delicious juices from the roast pork mixed in!

That being said, I felt like the roast pork could’ve been stronger in flavour and even the pork juices tasted a little watery.  It also diluted all that special sauce goodness so I felt the need to add even more to make up for it.

Little reason to mess with a tried and true formula with the filling, but give this a fuller and more consistent layer of molten cheese in the wrap and this would’ve been the most decadent and enviable street food on the planet!

Even without that, the tachuchos are another great option for a delicious but little-known taste of Venezuela! 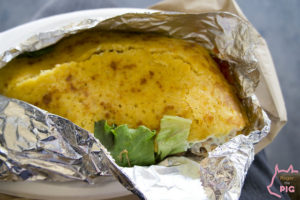 To be honest I probably didn’t need to try another one of the options as the formula for success is pretty consistent. Then again when you have something that works so well there’s no reason to mess with it!

Cachapas are pancakes made from mixing freshly ground corn into a pancake like batter before grilling. In Venezuela they’re often eaten with queso de mano, which literally translates to “hand cheese” in English, as the filling. The hand cheese is similar to mozzarella and is made from cow’s milk and ewe’s milk curd.

I would’ve loved to see cachapas used in this traditional way, but making hand cheese would probably require far too much preparation to be practical for a food cart looking for mass appeal.

The filling was doused with the same ketchup and vegetable based sauce as before, although this version was a little healthier with not so much sauce loaded in. As a result the roast pork and to a lesser extent the beef felt a little dry. It should be noted though that extra sauce was available at the stand but I only saw a hot sauce and the mixed pink sauce available.

The cachapa was unfortunately the most disappointing component. While the corn flavour was definitely present, I found the texture a little dry with was compounded by the fact that the cake itself was quite dense. I also didn’t get the nice char from grilling on the cachapas and even though it was made to order it felt a little lacking in authenticity.

I didn’t really notice the cheese that was supposed to be here and there wasn’t the same excitement of the oozing molten cheese that came with the tachucho.

By all means this was still a solid and filling option for a quick meal, but I definitely preferred their patacons and tachuchos!

Patacon Pisao does a great job introducing NYC to the wonders of Venezuelan cuisine street food-style! Thanks to this experience I think patacons now have a permanent spot on top of my list of cheap and delicious street food cravings, right up there with Halal Guys!