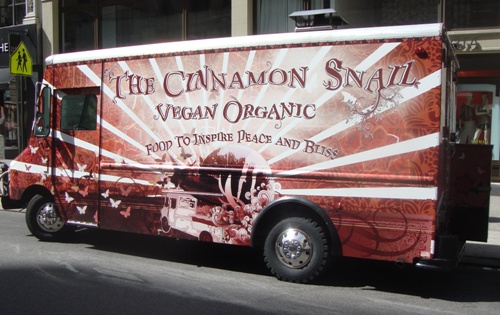 Adam Sobel, owner of the popular vegan food truck theCinnamon Snail, doesn’t get all preachy about being a vegan. Instead of sermons about the evils of the standard American diet or the darker side of factory-farmed animals, the 30-year-old Red Bank resident lets his food speak for itself, and hopes his cooking will get non-vegan customers to connect the dots on their own.

Since hitting the road  three years ago, the Cinnamon Snail has become aRed Bank Farmers Market staple while amassing a considerable following in Manhattan, where it has won multiple awards. Mobile Cuisine Magazine, for example, named the Snail “America’s Favorite Vegan Food Truck” in 2012.

redbankgreen sat down with Sobel on the front porch of his home over a cup of chai and some yerba mate to discuss the trials and tribulations of a kitchen on wheels and what’s next for the Cinnamon Snail.

How did you end up living here in Red Bank?

I grew up in Manhattan, and when I was 16 or 17, I fell in love with this Jersey girl [Joey Smith] who I married. We were living in Keansburg for a while and then moved to Red Bank about four or five years ago. [The house we moved into] used to belong to Lacey Sher, who I used to work for at Down To Earth. When they sold the restaurant, she moved back to the West Coast and she gave us a pretty good deal on this house.

Do you think you’ll stick around?

I don’t know if we’ll live here forever. We have our kitchen for our food truck a few blocks from here [on Catherine Street], and now we’re building a second truck. We had to set up [on Catherine Street] because it was all we could afford to do at the time, but it’s going to make sense to eliminate the commute out of our repertoire. [The commute] is extremely costly and makes a lot of things logistically difficult getting to and from the city everyday. So we’re going to be moving our kitchen to Brooklyn and chances are it may make sense to move to Brooklyn eventually.

You said you started cooking at Ouest in Manhattan and then ended up eventually at Down to Earth in Red Bank. How did you come to cooking, specifically vegan cooking?

I started to learn and cook professionally because I wanted to make yummy food for my wife who was, at the time, this french fry-eating vegan where french fries and canned soup was her diet. I never went to culinary school, partially because I had a family very young and couldn’t afford to [go to] culinary school but also because I’ve never been into school and it felt like a waste of time. I wasn’t receptive to learning that way.

After Down to Earth changed hands, it went out of business about eight months later and closed very abruptly. I had one kid at the time and we were closing on our house in Red Bank that week and I knew I needed to find something else to do. I was able to get a catering business off the ground and we started doing the Red Bank Farmers Market with a table. We sold cinnamon buns there, which is partially why the Cinnamon Snail is called the Cinnamon Snail.

The table and catering were very popular, and for years I’d wanted to do a truck, [but starting a food] truck is very complicated. So much more complicated than starting a restaurant. [A food truck] requires different types of licenses and permits and insurance, and then a lot of towns that you can operate in have a lot of weird unspoken rules and weird enforcement of rules.

What kind of unspoken rules?

Red Bank, for example, has made it completely impossible for me to work here in any circumstance other than the farmers market — which is ridiculous because I would love to serve the town I live in. They have an extremely prohibitive ordinance regarding vending that reads something like “you have to move every 10 minutes” and there are only five streets in the entire town that weren’t off limits [at the time we started].

Basically, what the Red Bank ordinance says is that you can only operate in Red Bank if you are a roving ice-cream truck that is selling prepackaged novelties. So it’s basically an ordinance that encourages junk food and makes it impossible to sell real food.

We tried to operate in Red Bank with our license. We said, ‘we’re going to try [top operate within] these five blocks’ but found you can’t really move a truck with a grill and with people cooking. So instead we tried to do what we did in Hoboken, where they have the same kind of ordinance but there are gray areas.

What do you mean by gray areas?

The way it panned out in Hoboken is you’re supposed to move after every sale. But we found a couple blocks throughout the city that had enough foot traffic [for us to operate] but also there weren’t any restaurants who were going to call the police and complain about it. And that’s the case with a lot of towns – there’s a rule, but if you’re not bothering anybody, they’re not going to enforce it. It’s an extremely gray area and makes it very difficult to figure out. So we tried [a similar approach] with Red Bank, and a week after we started that, RiverCenter went to the council to have them amend the vending ordinance to make the last four or five streets off limits so that there was nowhere where we could operate any more.  It’s not something I want to create a lot of beef about, but it goes to show how difficult and complicated  it is to operate this kind of business.

With all the complications, why not just scrap the truck and open a restaurant?

Because I love doing this. It’s so fun and we really get to bring vegan food to a lot of people who would otherwise never walk in to a vegan restaurant because of stigmas and stuff. We’ve become the busiest food truck in NYC. We serve a lot of people – a large percentage of whom are not vegetarian. That’s my goal. I didn’t do this to preach to the choir. I want to help people change their perceptions.

Isn’t there a perception that because you’re a food truck with less overhead, you have an advantage over a restaurant?

[Laughs] We’re like a restaurant that has its engine overheat on the Turnpike once a month and gets parking tickets. If I have a pizza place and someone else opens a pizza place two blocks over, you don’t spend all your time calling the police or the health department on the new restaurant two blocks over. You just accept it. But people realize they have a lot of advantage over street vendors because we’re more vulnerable. The overhead I have is every bit comparable to having a restaurant, at least in this town. I know other restaurants in this town that pay half the rent that we pay and they don’t have any of the maintenance or other issues we have. But they have a  lot more power as a collective to put more pressure on council.

It could certainly sound like you’re being excluded from the community. How do you feel when you roll into town in the Cinnamon Snail and see the “We’re building an inclusive community” sign?

I don’t feel bitter about it. Doing this whole thing has given me a lot greater insight into the complexities of how the business community interfaces with politics. It’s lame, and in my opinion a little bit corrupt, but if Mayor [Pasquale] Menna and the council want the town to be full of frozen yogurt places – well, they’re the ones running the town, not me. It’s kind of a shame for the people here in the community who would like to have us as an optiion, so we’ll try to be here on Sundays and I’m happy with that… We’re still at the farmer’s market, and when we relocate our kitchen, we’ll still make the trip down on Sunday’s for the farmer’s market, because it’s where we started out and we have a lot of loyal customers who have supported us through the years.

You come up with some interesting dishes. When you look at your menu, is there anything that’s you’re particularly proud of coming up with?

Well, we change our menu a lot, but every once in a while there’s something we look at and say, “Wow, we can’t get rid of that!”  There are certain things that are so good that we just cant take them off the menu.

We’ve got this Korean Barbecue Seitan that we make. We make our own fresh kimchi and ferment cabbage with local radishes and it’s got some really spicy smoked chilly seitian. That’s never coming off the menu. It’s so awesome. If you can deal with a little bit of heat, it’s going to blow your mind.

You said that you don’t want to preach to the choir, and you’d rather be in a truck reaching non-vegans with your food. Why is that so important to you?

[Cooking this food] is a way to turn people onto something like that without being preachy, without telling them about factory farms and all this horrible stuff. They’ll figure it out. If your food is really, really  yummy, they’ll connect the dots as to why we prepare vegan food. I believe most people are aware of a lot of the cruelty that our culture generates – not just cruelty to animals, but the way our culture is built on this out-of-sight, out -of-mind cruelty towards other people all over the planet –  by making all the  all the shit we use. I think people are aware of that cruelty and know it’s a problem, but just haven’t stepped up to their responsibility of how they’re going to change their lifestyles or principles or live according to their principles. I try to help them break down their last couple of excuses for why they still eat factory farmed meat and things like that.