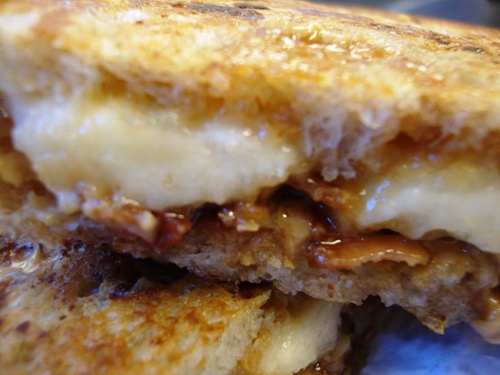 Years ago when we first started learning about Elvis Presley, we heard about 1) the music 2) the Ed Sullivan Show where he was only allowed to be filmed from the waist up, and 3) his favorite comfort food, a grilled peanut butter and banana sandwich.

Munchie Mobile has their own version with a couple of additions. We’re not sure if these additions were on Elvis’ sandwiches, or if they are taking artistic license, but one thing’s for sure – it looked crazy good!

One thing Elvis probably didn’t do was eat his sandwich on sourdough bread, but that’s what they used here. The sourdough bread did grill up nicely though.

Inside was not only peanut butter and sliced banana, but bacon and honey as well. We’re drooling just thinking about it days later. Yes, it was as sick as it sounds.

At first, the peanut butter was in danger of overwhelming the other ingredients, but the banana and especially the honey helped cut through the wall of peanut butter.

We expected bacon to be one of the main flavors, but it was not as strong as you would think. It did add saltiness to the sandwich, which along with the honey, gave The Elvis that sweet and salty dichotomy we so enjoy.

Between the peanut butter, bananas, honey and bacon, you could eat The Elvis for breakfast, lunch or dessert. Think of it as a multi-purpose sandwich.

You can check the location of the Munchie Mobile on twitter here or on our Mobile Munchies twitter feed.

One last thing. After eating this sandwich, we think it should be renamed The Fat Elvis. They might not sell as many with a name like that, but it would be truth in advertising. 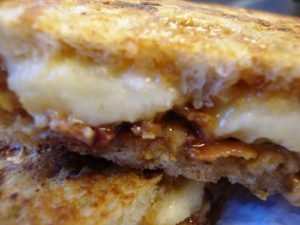