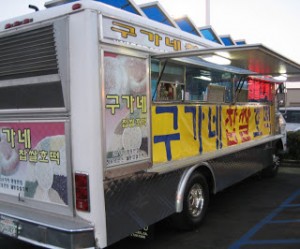 Koo’s Catering Truck is a misnomer in many ways. It’s not, for instance, associated with the late, great Koo’s Café of local DIY fame. It doesn’t operate as a catering service—instead, it’s permanently parked across three parking spaces at the Arirang Supermarket in Garden Grove‘s Little Seoul district. And while it’s technically a truck, its menu doesn’t aspire to the encyclopedic heights of a lonchera or the endless experimenting of a luxe lonchera. All it sells is coffee, water and the fabulous Korean pancake called hotteok—but calling it a pancake is a disservice to one of the finest, cheapest desserts in Orange County.

In reality, hotteok is more a dessert gordita, with wheat flour taking the place of masa. It’s similarly rolled into a thin circle with a stuffing—usually a caramel-esque syrup containing honey, cinnamon, sesame seeds and nuts. It’s then placed on a griddle so it crisps on both sides, so the inside steams up angrily after a bite, so that it keeps long after cooking and remains hearty. But while the gordita is savory, the hotteok is sweet; it’s the pastry tamale of Korea. Hotteok has never become a staple at Korean restaurants inSouthern California for reasons I’ve never been able to fathom, but it is a staple in Korean households come wintertime, and you can find ones frozen or in dough form at any of OC’s Korean markets throughout the year.

But if you want it fresh, then Koo’s Catering Truck is it in OC. Open from around lunchtime to the evening, it has parked at Arirang since 2010 and did a stint before that at a since-shuttered Korean market in Tustin, making it OC’s first non-Mexican lonchera long before Kogi’s was an inspired-by-a-blog idea in Roy Choi‘s mind. I think Koo’s sells its hotteok for $1.50—I say “I think” because I really don’t know, given I always opt for the four-for-$5 special. “Be careful; they’re hot,” the stoic Korean woman who runs the truck always warns, and she never lies—let them cool down for half an hour, and the filling still clings to your tongue like boiling Jell-O, the outside still steaming where not crisped brown. Each has a circumference somewhere between a CD and 45 rpm record, and each is sweet and earthy, chewy and perfect. One is fine; two is gluttony. But four will make you happy for a week—that is, until you eat all of them in one sitting, a fact as inevitable as gridlock on the northbound 55 freeway in the afternoon.