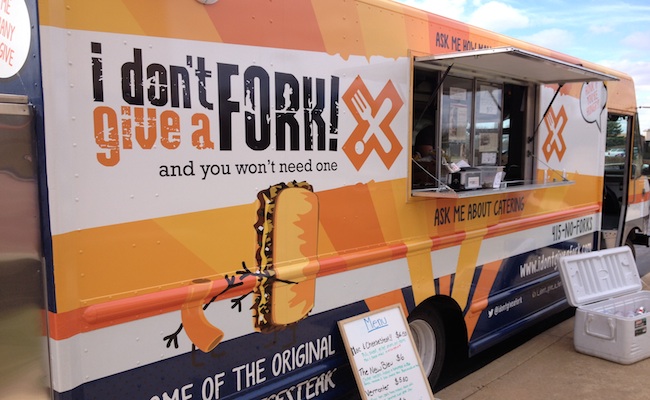 Matt Walton waited patiently at the window of the orange, white and black truck outside his office building. The steady hum of its generator was barely audible over the upbeat music that spilled from the truck’s speakers.

The food truck’s name, I Don’t Give A Fork, hinted at its concept. The menu features items diners can eat with their fingers. Consider the “Mac & Cheesteak” – a Philly-style cheesesteak with onions and mac ‘n cheese – and the “Vermonter,” a sandwich with ham, honey mustard, apple coleslaw and sharp white cheddar.

Walton, however, was waiting for fries. “I get them from every food truck,” he says.

His options are increasing. Both I Don’t Give a Fork and Kapow Food Truck revved up their engines for the first time in March. The Roaming Raven, an offshoot of the Deer Park Tavern, began parking in front of the Deer Park and at parties and festivals in January. Java Puppy, a mobile espresso truck, is heading into its third year.

Many of these vendors will be at the Wilmington Craft Beer Festival, sponsored by Two Stones Pub and Santa Fe, on Sunday, April 13, from noon to 4 p.m. And beginning April 22, Sweet Somethings Desserts will host Truck Love Tuesdays, from 10 a.m. to 2 p.m., in its parking lot at 1006 N. Union St. in Wilmington’s Little Italy.

So what’s driving the trend? Walton appreciates the convenience of just walking outside his office door to nab lunch – or fries. The businesses that allow food trucks needn’t worry about the cost of a cafeteria, noted Leigh Ann Tona, owner of I Don’t Give A Fork.

A food truck’s all-in-one approach also appeals to festival organizers. “They’re flexible as far as where they can park. Most are self-contained, and the owners are skilled at handling large crowds,” said Barry Schlecker of Barry’s Events, which produces the WilmFilm Fest, the Old Fashioned Ice Cream Festival at Rockwood and the Brandywine Festival of the Arts, which all feature food trucks. Java Puppy launched its food truck at the Wilmington Flower Market, and I Don’t Give A Fork plans to be at this year’s Firefly Music Festival

There’s another perk for event organizers. “Many of the local trucks have their own following,” Schlecker said. “They help to market the event.” Karla Fleshman of Java Pupy would agree. “We have a very loyal customer base,” she says.

But with the fun factor also come challenges, namely overhead, weather and current municipal policies that can make it difficult to park and serve.

Long a fixture on construction sites, food trucks in the past 10 years have taken it up a big notch.  Java Puppy, for instance, is the only café in the area with a manual pull-lever espresso machine. “It shows the artistry,” Fleshman says.

The subject of Food Network shows, food trucks generate about $650 million in revenue annually, and they’re projected to quadruple their revenue stream over the next five years to about $2.7 billion in food revenue, according to a 2013 report by the National League of Cities, which represents more than 19,000 cities, villages and towns.

They’ve long been a staple on Philadelphia’s streets – you’ll find several on seemingly every corner in University City – but it’s only recently that they’ve started rolling into Delaware. And residents have a healthy appetite for their fares, judging by the attendance at Harvest Ridge Winery’s food truck competition in March. It was well attended despite a day of pouring rain and the winery’s rural location in Marydel.

Tona got idea for I Don’t Give A Fork as a senior at the University of Delaware, where she majored in business and minored in entrepreneurial studies. For one class, she had to write a business plan, which went on to nab her $1,000 in the school’s Business Plan Competition. When Tona graduated in 2012, she put the plan into play, first with a food cart. She upgraded to the food truck to become more mobile.

For chef Norrawit J. “Wit” Milburn, a food truck gave him license to experiment in the kitchen, which he wasn’t able to do in his family’s Thai restaurant. On Kapow, he can offer Hawaiian-style chicken teriyaki with pineapple over rice and Korean beef with kimchee either over rice or in a taco. KOI on the Go is a Wilmington-based food truck whose menu also fuses different cuisines. You might find tacos, Asian pork sliders and crab cakes.

Customers enjoy the whimsy as well as the food. Last year, Dogfish Head Brewery parked Paul Bunyan’s Lunchbox in front of its Milton brewery to serve proprietary beer-infused braus, chowder and pickles to visitors. For now, the giant lunch box is stationary. “It’s mostly for our customers in Milton,” said Mariah Calagione, vice president of marketing, “but I’ve learned – many times – never to say ‘never.’”

Restaurateur Matt Haley, who has eight coastal restaurants, is adding a food truck to his repertoire. “It’s fun,” he says. His hospitality management company, Highwater Management, already handles concessions for sports venues, and he already has a catering arm. A food truck puts it all on the road. “It’s time for us to step up our game.”

Owning a food truck business has advantages, namely an owner can set his or hers schedule. Milburn has parked outside Famous Tim’s near Trolley Square to capture lunch and happy hour crowds (Famous Tim’s, a bar, does not serve food). If he wants to stay later, he can. Tona can sleep late, head to a site for lunch and then be done for the day unless she has a catering event.

There are drawbacks, however. Most municipalities limit food trucks to private property. The trucks can’t just pull up to the curb on Main Street. That’s not the case in some cities. In Philadelphia, Fleshman said, officials and universities realize the value that food trucks bring to workers, students and tourists.

The trucks, which usually announce their stops on Facebook pages and on Twitter, create a destination in a city. “Food trucks often bring their own following, and those customers may never have come to the area before,” Fleshman said.

Along with parking, perishable food presents its own issues. One day, business could be the brisk. On another, foot traffic might be sluggish or rain could keep diners indoors, and the trucks could pull out with only $30. Inventory management is key. “I need to be careful that there’s not too much left over,” Tona said. “I can have leftovers for a day but not four days. I’m getting the hang of it.”

Food trucks also don’t come cheap. Depending on whether it’s new or used – and the type of equipment needed – a truck could cost from $50,000 to $150,000 and up, says Tona, who purchased a used truck but installed all new equipment. Owners must also find a place to store the truck when it’s not in use.

Fuel prices can prohibit trucks from covering a wide geographic area on a regular basis, particularly for a truck like Java Puppy. “We’re serving coffee, not filet mignon,” Fleshman said. It’s hard to recoup the cost of traveling far with a beverage menu. And then there’s maintenance. Milburn was pulling onto Route 273 when his truck died. He hoped it would only be down for a few days.

Despite the challenges, expect more trucks to pull onto the highways. But if you’re thinking of joining the culinary convoy, do your homework, Tona said.  Create a startup budget and add 20 percent. Don’t get depressed if your income fluctuates one day to the next. It’s expected. Find a niche. “Everyone can do pizza,” Milburn said. “Be unique. Offer four specialty items you can’t find somewhere else.”

In the future, Tona would like to buy additional trucks and a new concept.  But for now, she’s keeping two hands on the wheel of the one she has.