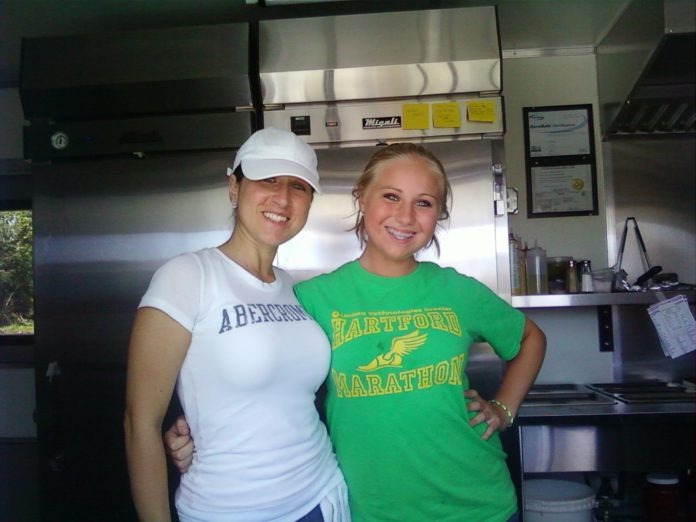 By Erica Schmitt
NEWINGTON — People who work, live and drive in town between 6:30 a.m. and 2 p.m. will no longer enjoy the famous baked beans and friendly conversation offered at Blanche’s Roadside Grill at the intersection of Pane and Maselli roads.

The food vendor parked in this location for the past year and a half has accumulated a large fan base of police officers, local businessmen and women, and even tractor-trailer drivers passing through the state on their way to and from Canada.

They all congregated for breakfasts and lunches of eggs, hot dogs, hamburgers, sausage and meatballs, sandwiches and much more, including Blanche’s famous baked beans.

Blanche, the kitchen’s namesake, is the grandmother of Ken Robitaille, a general contractor from Kensington. His wife Roberta’s cooking and his grandma’s recipe were so well-loved by family and friends that the couple decided they needed to be shared with the community too.

Since the recession, the construction industry hasn’t been very lucrative and the couple was struggling financially as many American families were, and still are.

“We decided that since she’s a great cook,” said Robitaille, smiling at Roberta, “we’ll start from nothing and make our way up until the economy kicks back in.”

“Now because of a certain ‘pain’ in the butt,” Roberta chimed in, “we have to close.”

She is referring to an individual who has been trying to shut their business down.

According to the Town Planning & Zoning Commission, the portable restaurant is a “traffic hazard” and is “taking business away from the ‘legitimate’ businesses in town.”

However, according to the Robitailles, the police department has visited their location numerous times to evaluate this complaint. They were told they were not a traffic risk and could stay. They were however, also told to put cones up around their site and immediately did.

“We were approved for this location before we spent a penny on having our mobile kitchen constructed,” said Ken.

“When it was approved there was no Sam’s, no Stew Leonards,” said commission chairman David Pruett.

“It was an interior road that was not used to the extent that it is being used today by the heavy truck traffic,” added Town Planner Ed Meehan.

Other town officials are displeased that street vendors in general don’t have to follow all of the regulations and pay the fees that established restaurants do.

“These people are paying a $35 fee, they are not paying any taxes,” said alternate commissioner Frank Aieta. “They are taking business away from legitimate businesses that have put the investment into their business and go into a building and do all of the things the right way, and I don’t think that this regulation was made to have in mind that size of a cart. This is not a cart, it’s a bus.”

Commissioner Dominic Pane is especially distraught over the issue. “This safety issue has to be taken care of right away,” he said.

Ken and Roberta are upset that they were initially given permission to be a vendor at that particular site and followed all the rules from the beginning, but still feel “harassed.”

“We let them know that we wanted this location only, and if we could not get it then we would not have done it,” Ken wrote on Blanche’s Roadside Grill’s homepage. “Now that we have built a thriving business by following their rules, they are going to change them.”

Because these officials figured out that the renewal of the vendor’s permit is due in December, it will not be renewed. Therefore, Ken and Roberta left the premises Thursday. The couple figured it would be impossible to sell their lunch truck in the winter months, after the town officially makes them leave, so they decided to close up shop early and sell it right away.

“I feel as if I just lost my best friends. You guys are amazing. You made everyone feel welcome and that each one who visited your cart left feeling like they were special. You greeted me with a smile and sent me off with a great bite to eat and another smile for good measure. Roberta and Brit and Sandy your smiles are priceless and will be missed,” Dennis James of Middletown wrote in a e-mail to the couple.

“We’d like to thank all of our phenomenal customers who made us so successful and we apologize for the abrupt closing,” said Ken.

For more information on Blanche’s Roadside Grill and their struggle to stay in business, visit www.blanchesbakedbeans.com.