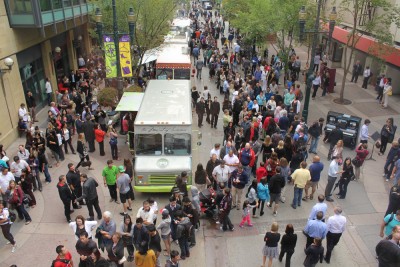 The mushrooming North American street-food movement has finally arrived in Calgary, and my mouth is watering.

In San Francisco, where the third annual street festival will be held Saturday, the choices are extravagant. All food under $8, the menu includes Chinese buns stuffed with your choice of pork belly, sesame chicken with bok choy, or garlic tofu with miso greens. Yum.

They are reportedly delicious. I’m not convinced.

Calgary’s foodies won’t push the edges quite so robustly, at least not yet. While Los Angeles boasts some 9,500 food trucks, Cowtown is starting with just eight, in a pilot project already causing controversy in some neighbourhoods fearful of the competition.

Participants include Fiasco Gelato, which recently closed its Kensington location because of what it says was escalating rents. Perogy Boyz sells street food inspired from Eastern European cuisine. Charcut Roast House, one of the country’s top 10 new restaurants, is behind Alley Burger, which morphed from the restaurant’s back alley business of selling its famous burgers for $5 from the back door, on random late nights.

What’s leaving a bad taste is how most Business Revitalization Zones (BRZs) seem to have taken a closed-door, and closedminded approach.

They were consulted as “full partners” in the city’s pilot project program, to determine where and if food trucks would be welcome in their neighbourhoods.

What these associations ruled as “no roll zones,” however, potentially sets up the movement for failure.

The respective BRZs have banned them from the entire Uptown 17th Avenue S.W. main drag, all of Kensington and most of Marda Loop, except for a vacant lot at the N.W. corner of 33rd Avenue and 20th Street S.W.

Stephen Avenue Walk is off limits, as is Barclay Parade, near Eau Claire.

They’re allowed on 4th Street S.W., but only north of 17th Avenue and in Inglewood, provided they are no where near the hustle and bustle of 9th Avenue, between 10th Street and 14th Street S.E.

It’s great that the city is trying to bring in street food with full support of interested parties, but at the end of the day, the BRZs need to be reasonable. The no roll zones cover the very areas where you would expect street food to thrive, in high traffic, pedestrianfriendly neighbourhoods.

This is wrong. It also cuts against the grain of Calgary’s legendary competitive and entrepreneurial spirit.

Bear in mind, the BRZs do represent a special interest; that of the local business owners in their zones.

They are financed by a special levy each business owner pays on their annual business tax bill.

Jennifer Rempel, the executive director of the 4th Street BRZ, told the Herald’s Sean Myers that her BRZ put in the restrictions on 4th Street to protect restaurant owners who were nervous about what that sort of competition would mean to their businesses.

“For now, it’s playing it a little bit safe so you don’t just turn on the faucet full force,” she said. “We are slowly easing into it.

Sometimes that’s a great approach, to not cause too much disturbance and make sure it’s a successful pilot.”

Playing it safe and riskfree is the last thing I would expect from a pro-business group in a city as innovative as Calgary. It’s also anathema to the spirit of street food, which in San Francisco, was born from a group of entrepreneurial women vendors who started their businesses from their homes, on the streets, or wherever they could find space. They eventually formed a group, La Cocina, to advocate for progressive city policies in 2005 “that would allow these incredibly talented chefs to formally bring their products to the marketplace,” says the San Francisco Street Festival’s website.

San Francisco is one of the best food cities in the world. Calgary could be too.

Street food would thrive in Kensington, where there are ample fine dining options for a special night out, but few casual eateries that offer healthy food at reasonable prices, other than pubs.

And good luck finding a kitchen that’s opened past 9 p.m. or 10 p.m., during the week. Food trucks would perfectly complement this entertainment and shopping district, by offering a quick bite late at night when everything else has closed, or supper at the end of the day for shoppers, who might then decide to hang around for a coffee, a drink or discover their next favourite restaurant.

The city rightly must work out the logistics.

Trucks have to be parked conveniently and safely, without obstructing the sidewalk or interfering with emergency corridors. But for BRZs to ban street food for fear of competition, is an unappetizing prospect.

Scrap the no-roll zones, and let us eat.