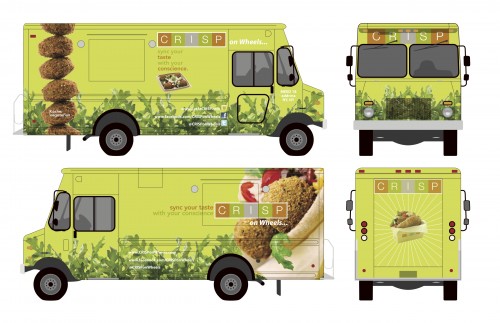 Taïm Mobile will soon be getting some competition out on the streets. CRISP, which has three brick-and-mortar locations in New York City, will be getting a truck that’s hitting the pavement on April 4.

“With our three locations, we were limited to how many people we could reach,” explained owner Alon Kruvi. “A truck allows us to be everywhere and bring our food to everyone.”

The truck will make its debut in Soho and the Upper East Side (follow @CrispOnWheels on Twitter). Not quite prime locations for food trucks, but Kruvi explains they won’t be staying in those neighborhoods forever. “We plan on launching there to work out any kinks before we serve the Midtown lunch crowd. We’ve done some unique things on the truck to make sure that you’re not waiting on line for a half-hour. One way we’re doing this is by accepting credit cards, which will cut down on ordering time.”

And what will you be able to order? For one, the fusion Mexican-influenced falafel. “The Mexican started when I opened my first falafel shop in Israel. We wanted to try and do something unique that stood out from other places, and we decided to bring these unique international flavors together. Our stores specialize in fusing different global cuisine because it helps people who may not be interested in falafel to try it. Falafel is an extremely healthy food, and by combining with it other ingredients like guacamole you get a surprising, unique eating experience,” noted Kruvi.