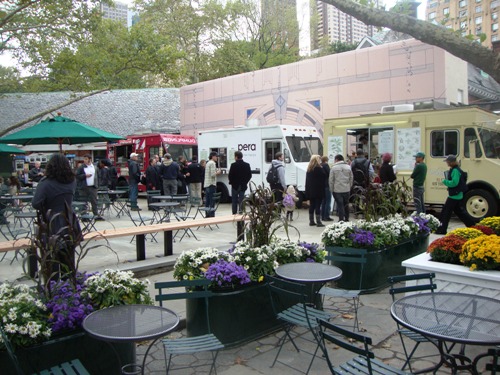 A four-year contract ratified on Thursday by employees of Central Park’s Boathouse has both the union and the restaurant hopeful that a labor deal could also be reached at Tavern on the Green if the Boathouse’s operator, Dean Poll, gets a second chance to run that establishment.

The city has not said whether or when it would issue another request for proposals to operate Tavern, but the three food trucks that have been in the courtyard of the closed landmark for nearly a year have been told unofficially that their contracts will likely not be renewed.

“The indication was that it was highly likely that it would not be renewed,” said Burak Karacam, managing owner of the Pera Turkish Tacos truck. “They said there’s a capital project being planned.”

The trucks’ contract expires on Oct. 15, he said.

Andrew Brent, a spokesman for Mayor Michael Bloomberg, said the long-term plans for Tavern are still being evaluated. He said the city is doing some stabilization and renovation work to the building, and there is no firm commitment to issuing a request for proposals.

Crain’s New York first reported on the settlement reached between Mr. Poll and the union and on the work being done at Tavern.

In 2009, the city awarded Mr. Poll the operating license for Tavern. But labor negotiations between Mr. Poll and the New York Hotel Trades Council, which represents the employees, collapsed last year.

According to a spokesman for Mr. Poll, the restaurateur remains interested in operating Tavern and would likely submit a proposal if the city puts out another call to operate a fine-dining restaurant in the space.

“Dean has always had an interest in Tavern and still does,” said Frank Marino. “This agreement shows that Dean and the union can come to terms and it, I think, speaks well to a future endeavor if that were to come to pass.”

The Boathouse contract ends a spirited 44-day strike at the restaurant. The contract includes raises for most employees, as well as free health care.

“You’re going to have over 100 workers who have no-cost health care for themselves and their family,” said Josh Gold, a political director for the union.

The agreement comes as the National Labor Relations Board was preparing to lodge a legal complaint, akin to an indictment, against the restaurant’s management. The complaint would have alleged that the Boathouse illegally threatened workers and punished more than 15 employees for attempting to unionize.

The union intends to withdraw the charges, said Mr. Gold.

The Boathouse contract was heralded by all sides, including by Deputy Mayor Robert Steel, who played a critical role in negotiations held at Gracie Mansion.

“Not only does the restaurant add to the vibrancy of the City in one of its most stunning settings, it also provides important City revenue, and this agreement will allow it to continue to thrive,” said Mr. Steel in a statement.

Mr. Marino said the agreement was good “for the long-term viability of the Boathouse.”