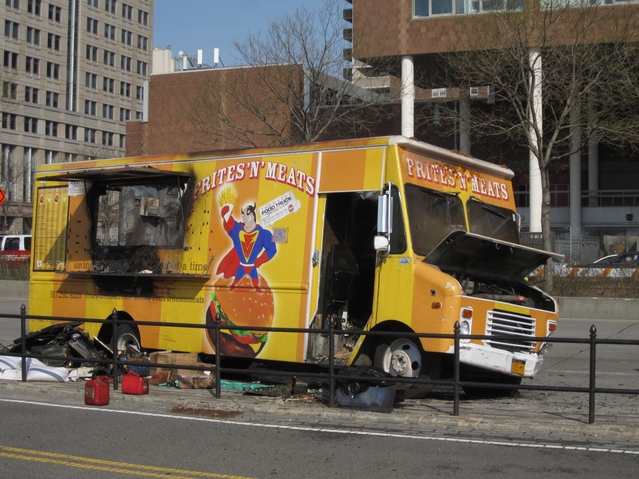 The Frites ‘N’ Meats truck was carrying four propane tanks but was only allowed to have two, a source said.

TRIBECA — The food truck that exploded while driving down the West Side Highway earlier this week was carrying too many propane tanks, a source told DNAinfo Friday.

The Frites ‘N’ Meats burger truck was only allowed to carry two tanks of propane, but the source said the truck was carrying four tanks last Monday afternoon when it collided with another car on southbound West Street in TriBeCa. The collision ignited one of the propane tanks, burning the two people in the truck, one seriously.

The FDNY is still investigating the accident and has not issued any violations, a spokesman said. FDNY’s Fire Marshals are looking into the possibility that the explosion was caused by a faulty or leaky propane tank, the spokesman said.

The Fire Department was not aware of any previous fire-safety violations for the Frites ‘N’ Meats truck.

Hiassam Beydoun, one of the three brothers who own the food truck, said Friday that he could not confirm the number of propane tanks on the truck.

“We don’t know what happened yet,” Beydoun said.

Beydoun’s brother Mohamed, also known as Moody, was severely burned in the explosion and is still in the hospital, but he is expected to make a full recovery, Beydoun said. The other worker who was in the truck did not suffer serious injuries, Beydoun said.

Hiassam Beydoun has been regularly updating the food truck’s 4,500 Twitter followers about his brother’s progress, and yesterday Mohamed added his own tweet: “Hello every1, this is Mohamed. Thx 4 all the support and love. Sorry 4 the traffic I caused on Monday. Miss U. Can’t wait 2 C u all again.”

The fiery accident, which shut down the southbound West Side Highway for two hours, alarmed local residents, who frequently see the Frites ‘N’ Meats truck parked near TriBeCa’s P.S. 234 and Washington Market Park.

“They’re parking these roving fire bombs in places where there are lots of kids,” said Allan Tannenbaum, a longtime TriBeCa resident and Community Board 1 member. “It’s an accident waiting to happen.”

After Tannenbaum mentioned his worries at a CB1 Tribeca Committee meeting earlier this week, the committee agreed to ask CB1 Chairwoman Julie Menin to write a letter to the city expressing their concerns.