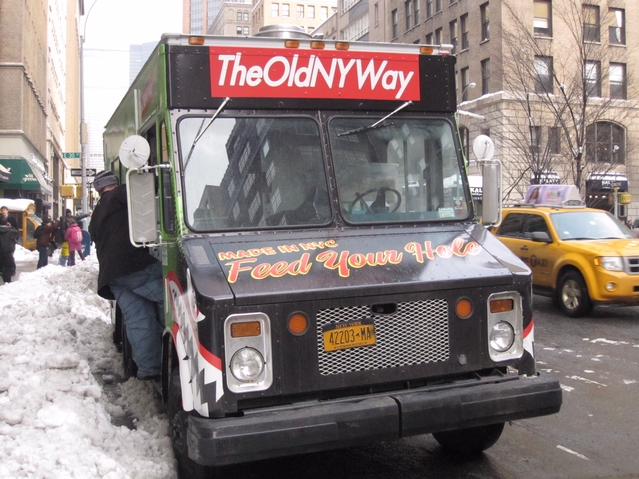 Welcome to the new “Feed Your Hole” food truck, which officially debuted with some serious attitude Friday after a week of mechanical problems and snow-fueled delays.

With a raunchy logo and tattooed tough-guy at the helm, Feed Your Hole earned lots of buzz from local food bloggers itching to try the $3 “Sloppy Weiner” hot dog topped with steak chili, and the $5 “DA’ Bronx Bomber,” a burger bun stuffed with two hot dogs, cheese fries, chili, tomatoes… and more fries.

The truck had been slated to launch on Monday, but owners were thwarted by mechanical troubles. Then came the piling snow. When the truck finally made it out Thursday, it was booted from three different locations by police and building owners who were trying to clear snow, operator Sean Sullivan, 30, said.

The truck finally kicked off its first official day of grilling at about 1 p.m. on Park Avenue at East 30th Street.

Sullivan, a clothing designer who also went to culinary school and retrofitted the former masonry truck himself, said he was inspired to join the food truck business by the summer street fairs he remembered growing up with on the Upper West Side.

“I just like sloppy food,” explained Sullivan, who promised his food would pack on the pounds. He planned to serve both the lunch hour and late-night post-club crowds.

In addition to the grass-fed beef burgers and hand-cut, sea-salted fries, Sullivan makes his own organic toppings and sauces, including pickling his own cucumbers and roasting tomatoes for his own ketchup.

But Friday’s debut also had its problems. They two-man crew had trouble keeping track of orders and the turnaround time was slow.

“This is tough,” said Sullivan, as he frantically tried to juggle taking orders, flipping burgers and scooping fries in the cramped, smoke-filled space.

But those who lined up for a try weren’t complaining. Brooklyn resident Anthony Sessions, 52, traveled all the way from his office on Avenue C in the Lower East Side for a taste.

“Who the heck has peanut butter and beef together?!” he beamed as he waited.

“That’s awesome! Why did I not think of that?” agreed Brooklyn resident Michelle Cammarota, 26, who works around the block.

Alias Keis, 31, who lives in the Financial District and works in Midtown, said he’d heard about the launch online and was immediately intrigued.

“It’s different from all the other Korean and Taco trucks that are turning up,” he said

The truck will be posting its location on its twitter feed.