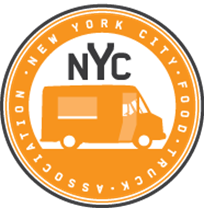 WHEN beset by predators, there is always a comforting resort: the safety of the herd.

And so, as food trucks are being chased from Manhattan streets by police officers enforcing a recent court ruling on parking, a group of vendors huddled together Friday on a cul de sac by Midland Beach. Billed as the Staten Island Food Truck Festival, it was the latest manifestation of such migratory feasts: food courts of food trucks.

“We think it’s important for food trucks to have an alternative to street vending, and it’s good for them to be together in a safe spot,” said David Weber, president of the New York City Food Truck Association.

Now, the association is about to preside over what may be the city’s first dedicated food-truck lot, in a parking lot at 43-29 Crescent Street in Long Island City, Queens. It will open in two weeks as a daily home for five trucks, and the group is looking for more locations.

This follows the pattern in greater Los Angeles, where the Southern California Mobile Food Vendors Association, which has 130 members, runs five lots. “We are getting more and more calls to manage more and more lots,” said Matt Geller, chief executive of the association. Many are partnerships with institutions like the California Heritage Museum in Santa Monica.

Gatherings of food trucks, often branded vendors with Twitter followings, have developed a life of their own in New York. Before institutionalizing the food lot in Long Island City, the New York association helped sponsor a rally May 22 at Grand Army Plaza in Brooklyn. The group, with 25 members, found the smorgasbord of 12 trucks and some 2,000 customers so successful that it’s become a recurring convergence on the third Sunday of every month.

A rotating collection of trucks has landed at the Lot on Tap, the pop-up beer garden at the north end of High Line park at West 30th Street in Manhattan.

And the first Zagat Food-Truck Frenzy brought 25 food trucks and 1,600 people to Chelsea in May despite the rain, “and we’re looking to do it again, in New York and other cities,” said Tiffany Herklots, a spokeswoman.

In Staten Island, and earlier at Tavern on the Green and a gathering at the parks department headquarters in Central Park, city officials have had their own food-truck agenda, given their difficulties attracting better and more-varied food to parks. Adena Long, the parks commissioner for Staten Island, said that when the parks department opened about 50 spots around the city to new food concessions, it received no applications for four places in the borough.

“We’d like to get operators interested in establishing their trucks here, and we hope it can become a regular thing,” she said of Staten Island, adding that the department will sponsor another food-truck gathering at Midland Beach this Friday, and one in August.

The Midland Beach gathering was more of a mini-festival, since threatening rains and mechanical breakdowns limited the turnout to four trucks, a van and a tent representing the local Killmeyer’s Old Bavarian Inn.

Still, Cesar N. Fuentes, whose Solber Papusas truck attracted a long line at the beach, saw promise. “We hope that by being here, we can act as an incubator for local businesses,” said Mr. Fuentes, executive director of the Food Vendors Committee of Red Hook, Brooklyn.

In fact, Ken Tirado, the proprietor of Killmeyer’s in Charleston, Staten Island, quizzed him about the cost and operation of a food truck he’s been contemplating. “This event is an exploration for me,” said Mr. Tirado, who was selling $5 bratwursts from Morscher’s Pork Store in Ridgewood, Queens.

Radames Montero, a retired banker who did a double take at the trucks before him, promptly lined up with his wife, Pearl, and their 2-year-old granddaughter, Grace. “Staten Islanders love to eat,” he said, adding that the festival “could become a destination location.”