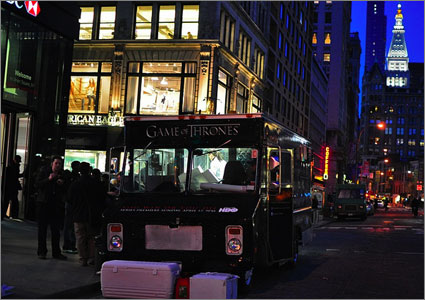 HBO’s Game of Thrones has hired celebrity chef and Top Chef judge Tom Colicchio to be the bread to its circus. All this week, Colicchio is serving free food (including meats like rabbit, duck, squab and venison) from trucks in NYC and LA. Each day’s cuisine is based on a popular type of food from a fictional region in the medieval-fantasy series, which premieres April 17. Yesterday, it was Kings Landing, which meant crispy tout with almond butter and cumquat chutney, roasted rabbit with preserved lemons, honey, scallions and braised pistachios, and lemon-cake dessert. The only way to find out the menu and truck location is to follow the Game of Thrones Twitter feed. Food trucks are all the rage now in promotional marketing. But while I wasn’t tempted by Air France’s offer of free airline food, or the History Channel’s Swamp People food truck, this stunt has me wishing, for once, that I lived in New York and not Atlanta. Of course, if this were super faithful to the Game of Thrones series, a couple of the portions will be poisoned.