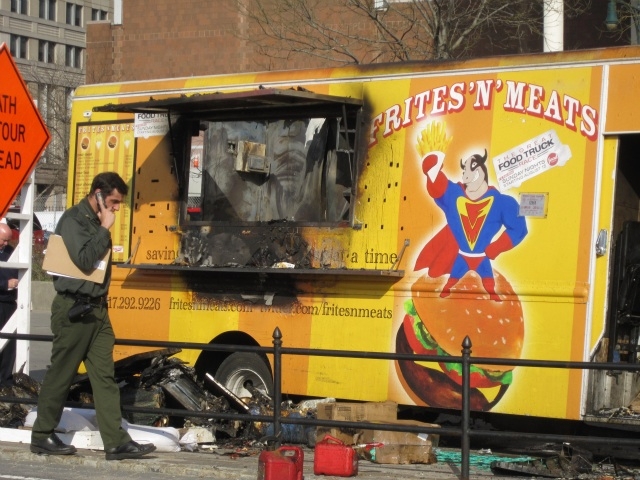 The explosion occurred after the truck hit another vehicle on the southbound side of the West Side Highway, and southbound traffic was blocked for hours as firefighters responded to the blaze.

The two men were taken to New York-Presbyterian/Weill Cornell Medical Center and listed in serious condition with burns, the FDNY said. Their injuries did not appear to be life-threatening.

“I just hope nobody was seriously hurt. My two brothers were in the truck,” said a distraught man who answered the phone number listed on the Frites N’ Meats website before hanging up.

Frites N’ Meats, which specializes in burgers and fries, is run by three brothers: Mohamed, Ali and Hiassam Beydoun. It was not immediately clear if any of those brothers, or which ones, were in the truck.

The man on the phone had earlier taken to Twitter desperate for word on his brothers.

“If anyone has any info on my brothers location or status please call me,” he tweeted. “Please call me.”

Later, he caught up with his brothers at the hospital and tweeted: “My brother got burned/bruisedup as they jumped out. But they will be ok. Will update; but found & in great care.”

Morgan Brill, 45, was jogging along the Hudson River when she saw the truck and a black car clip each other before the truck burst into flames.

“It was so much smoke,” she said. “I saw fire coming out of the top, the back and the sides.”

She saw one man jump out of the burning truck, she said.

“It looked like the truck was smoking as it was driving down [West] Street,” said Jameson Croasdale, 29, who rode his bike past the scene. “The smoke was all the way back up the highway.”

Battery Park City resident Jacqui Brown, 41, was on her way to the new Pier 25 playground with her 5-year-old son, when she saw nannies hurredly pushing strollers and children away from the smoke.

She said her son recognized the burned-out truck, which he liked to order from, and said, “Oh no, my French fries!”

Fire officials said the call for the accident came in at roughly 3:13 p.m.

The other call involved in the accident appeared to be from a Brooklyn car Service. A worker who answered the phone there had no information about the incident.

Police said they didn’t have any information on the incident, either.

A fire truck got stuck in the plantings on the bike path median along West Street while responding to call. After the flames were doused, firefighters were working to free their vehicle.