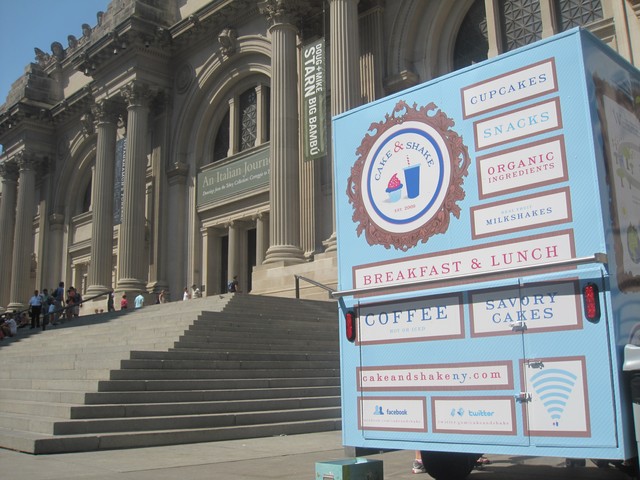 
UPPER EAST SIDE — A drive to replace dirty water dog carts with purveyors of fancier food is leaving a bad taste in the mouths of Upper East Siders.

As licenses expire, the Parks Department is slowly replacing some of the roughly 55 hot dog carts in and around Central Park with “specialty food carts” — a new breed of vendors who often offer gourmet treats that are devoutly chronicled by foodie blogs such as Midtown Lunch and New York Street Food.

But the concept of upscale street eats is proving hard to digest for some.

Community Board 8’s Parks Committee is overwhelmingly opposed to these bigger-sized carts, which members claim are visually and environmentally polluting the park.

Glenn Kaalund, a project manager in the Parks Department’s Revenue Division, visited the CB8 meeting Thursday night to try and sell members in on the proposal.

“This is our opportunity to offer the public alternative choices when visiting our parks,” Kaalund said.

“The public wants a greater variety of food other than hot dogs. Tourists love hot dogs. But those of us that are local, not many of us make a stop at a hot dog stand.”

The Parks Department has already replaced two hot dog vendors in front of the Metropolitan Museum of Art (which had been bringing in $250,000 to the city, Kaalund noted) with the Cake & Shake’s organic cupcakes and Sigmund Pretzelshop’s handmade pretzels.

The Parks Department is planning to swap hot dogs for fancier eats at two other locations, soliciting bids by Feb. 25 for a specialty cart or food truck at 80th Street and Central Park West and one at 72nd Street and Fifth Avenue, Kaalund told community board members.

The board’s committee members voted against these two specialty carts. They expressed enmity toward the new carts in front of the Met, too.

Community members complained about the new carts’ “visual clutter” and their cooking smells. One said if she lived on Fifth Avenue across from where one of these carts is slated for 72nd Street, she would be “beyond appalled and upset” by “the noise, the smell, the dirt, the congestion.”

Rudder noted the park’s kiosks or buildings already offer other food options, including a Knish Nosh, the Boathouse and a Pain Quotidien.

She and others were especially angered by the food trucks now serving up beef bourguignon and fried truffled chick peas at Tavern on the Green. They had approved the trucks, members said, under the erroneous assumption that the vehicles were going to have a uniform design and no on-site cooking.

“The trucks worry me. Is it going to be the park is going to be filled with them?” Rudder asked Kaalund.

He didn’t think that would happen: “There are not many opportunities to put a truck without it being an obstruction for pedestrians.”

Kaalund seemed open to the board’s suggestions. He told DNAinfo he’d like to find a “happy medium.”

The Central Park Conservancy is also considering a specialty food cart — perhaps in a Victorian-era structure to fit the park’s aesthetic — for Cherry Hill near the Bethesda Fountain, Kaalund told CB8 members.