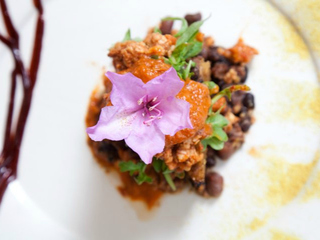 MANHATTAN — After pulling back into their shell for the past few months, the Cinnamon Snail vegan food truck will return to Manhattan next week, serving up its dairy-and-meat-free menu in the Flatiron.

Owner Adam Sobel, 30, said he will head to the Flatiron on March 26, after a poll of the Snail’s Facebook and Twitter followers showed that the area was desperate for vegan fare.

“There’s some pretty underserved neighborhoods, as far as vegetarian food is concerned,” Sobel said. “All winter, I’ve been getting a couple phone calls a day from people asking us where we are.”

The exact location will be sent out via social media as soon as Sobel finds a parking spot.

Sobel said he is planning to hit several other neighborhoods later in the week, including the Financial District and Union Square.

Sobel is combining the Cinnamon Snail’s reemergence with the debut of two new menu items. The ancho chili seitan burger began as a special menu item last year. Now the burger — made with ground wheat gluten and topped with horseradish cream and a piri piri pepper sauce — will become a permanent fixture.

“It’s just what I love doing,” Sobel said of creating new vegan options for the Cinnamon Snail. “I just think about what’s going to be yummy together and work it out.”

The New Jersey-based Cinnamon Snail last slid through the city back in December, causing vegans throughout Manhattan to rejoice.

“It’s hard to find good vegan food around here, especially relatively inexpensive vegan food,” said Peter Herbsman, 41, who works near the corner of East 33rd Street and 5th Avenue, where the truck was parked back in early December. “There’s vegan food around, but it’s not cheap.”

The truck had been a fixture in Hoboken until a crackdown on food trucks there forced Sobel across the Hudson River to Manhattan.

But a similar fight against food trucks hit New York City last year as well, and Sobel said the attitude toward the mobile fleet of food vendors in the Big Apple remains “a little bit volatile.”

“No matter where you are, there’s people a little bit pushing back against being able to operate a food truck in their neighborhood for some reason or another,” he said.

“It helps nobody,” he added. “Especially the people in the community.”