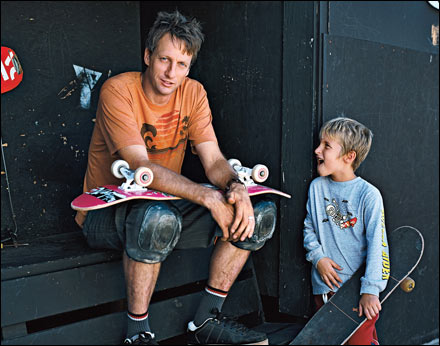 When I told my 10-year-old daughter I was writing a story about Tony Hawk, she screamed: “He’s the world’s most famous skateboarder!”

Then she retorted, “Why are you writing about him? What does that have to do with food?”

Well, I’m writing about the skateboarding legend because he’s ending his annual Easter Egg Hunt with a huge free food event Saturday. And Maven readers are among the first to get exclusive details about the event.

The 4 p.m. food gathering will feature restaurant vendors and food trucks run by Wahoo’s Fish Taco, Boardwalk Ice Cream, Buca di Beppo, Flippin’ Pizza and Boneheads. On top of that, reps for the event say Hawk will join other skateboarding icons for a demo.

And did I mention the food is free?

The twist: The location of the event, somewhere in North San Diego County, will be revealed sometime Saturday.

In case you don’t know about Hawk’s Easter celebration, here’s the lowdown:

This is the fourth year where Hawk and his clever social media crew hide “eggs” in various communities around the world — from New Zealand to Ireland to Orange County.

Eggs are actually free prizes.  Throughout the day, Hawk will Tweet clues as to where each egg is hidden. In past hunts, packages have been filled with autographed skateboards, skate gear, audio equipment, golf gear, bicycles, toys, clothing, smart phones, video games, snack foods and gift certificates. (More “how to hunt” details here)

Hawk reps tell me that Orange County will be home to at least three to four “hidden” eggs. Word has it that a bike will be tucked in at least one O.C. location.

At least three to four other “eggs” will be hidden between Los Angeles and North San Diego County.

Once a lucky person finds a prize, he or she is asked to upload a picture and Tweet “found” to @tonyhawk using the hash tag #THTH.

To get the clues, follow Hawk’s Tweets: @tonyhawk. You can also follow the egg hunt thread on Twitter by using this hash tag over the next 24 hours:  #THTH

I will be Tweeting about Orange County-specific clues throughout the day and plan to reveal the free food event sometime tomorrow, so follow me at @fastfoodmaven and LIKE my new Facebook fan page to get the scoop.
Recent Tweets from Hawk about the event:

some #THTH packages won’t necessarily be given to the first finder, but the first willing to accept a challenge for the sake of good video.