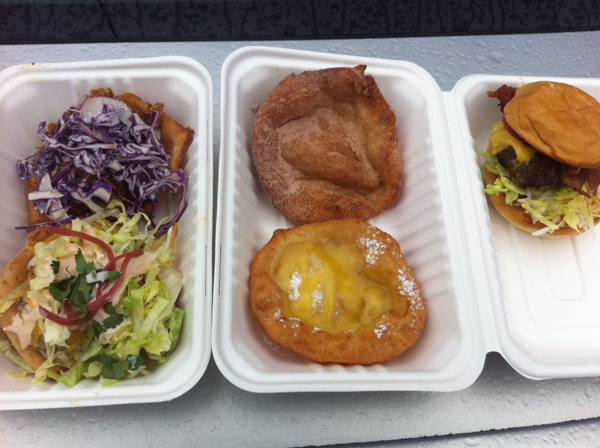 By Rebekah Denn | The Seattle Times

Mark McConnell’s mother grew up on the Blackfeet reservation in Montana, and he grew up in Seattle eating the frybread and “Indian tacos” and other foods that his mom and grandmother would cook for gatherings and special occasions. At some point, he noticed that our region, despite its many tribes, had no everyday eatery for Native American foods. We had “a large community, but no cuisine,” he said, a phenomenon that has confounded onlookers for years. Enter “Off The Rez,” the big blue food truck McConnell and partner Cecilia Rikard recently opened. The cook is longtime buddy Donovan MacInnis, a former sous chef at Portalis.

Late nights on Capitol Hill, and lunchtimes around town, they’re offering tacos and succotash and sweet and savory frybreads.

“We gathered recipes, we talked to a bunch of my family members and got a bunch of different variations on frybread recipes, blended them together and added our own touches,” McConnell said. “Everything we have has a traditional side to it, but is tweaked a bit and modernized,” such as going with a topping of pickled onions rather than traditional tomatoes on the taco. The pulled pork taco is the hottest seller so far, and a Velveeta-y, bacon-stuffed hamburger slider is “starting to catch on.”

On our recent visit, we dove into a heaping, hearty selection of crisp-edged, puffy frybreads piled high with smoked pork, with juicy chicken chili verde, and with beef chili, topped with cumin cream. We finished off with dessert frybreads, one spread with house-made lemon curd, one sprinkled in cinnamon sugar like the best fresh Elephant Ears the fairs never achieve.

To one Yelp reviewer, the food is way more than that; he says a good frybread is something where “you can taste warm summer pow wow nights, broken treaties, a proud people, beautiful indigenous words, and lost loves.” And the Off the Rez version, he said, takes frybread culture and makes it their own, “modern, succulent, and cultural.”

The food has won plenty of non-Native fans, but McConnell says it’s been warmly received by tribal customers too, though they’re quick to note discrepencies from tradition. “Most of them say, ‘These are the best Indian tacos I’ve ever had,” McConnell said. “Some of them say, ‘Where’s the rest of it? This isn’t big enough!” His version is smaller than the standard, which would normally take up an entire paper plate. “On the street it’s not very practical. We thought we’d make them smaller, and people can try different ones.”

Before the truck, McConnell worked at a law firm, wearing “a lot of hats” but focusing on technology before quitting to plunge full-time into the food world. If his name sounds familiar already, it might be because of brother Mike, founder of Caffe Vita and Via Tribunali and a host of other restaurant ventures. (“We’ve got entrepreneurial spirit, I guess,” he said.)

For the future, the goal is to “get this rolling through the summer and hopefully, next year, start thinking about what we could do next,” maybe a bar or sit-down restaurant. They cater, and they’re also looking at a side business building food trucks for other customers (First up: A Caffe Vita truck). “There’s no one in Seattle who builds them,” he said; they wound up buying a former linen truck on Craigslist in Portland, gutting it, and building a kitchen inside. “We took a lot of metal shop classes. We’re kind of mechanical guys,” he said.

There are long-term hopes for a Northwest-focused Native American restaurant at Seattle Center (think elk and salmon and bannock bread); an organizer told Seattle Weekly last year that the lack of tribal eateries is partly due to “knotty issues surrounding treaty fishing and hunting rights.”

Until then, we’ve got the updated Blackfeet-inspired version.

You can find the Off the Rez schedule online here, but I find it’s useful to check their Facebook page for last minute plans. The Capitol Hill stops are fairly regular, from 10 p.m. to 2 a.m. by the Caffe Vita at 1005 E. Pike St.

Rebekah Denn stepping in for Nancy

Rebekah Denn is a James Beard award-winning food writer and former Seattle Post-Intelligencer restaurant critic. She can be reached at rebekahdenn@gmail.com or on Twitter at @rebekahdenn