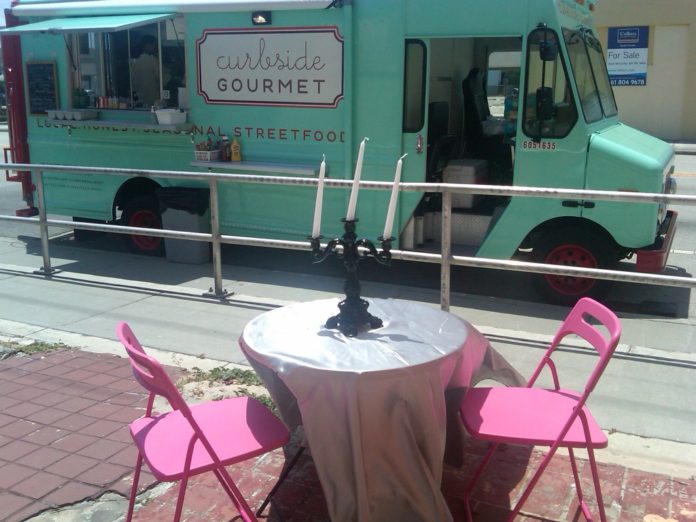 “It’s not that we aren’t doing anything about it,” Mayor Jeri Muoio. “We either need to figure out how to make our code stronger or develop some additional regulations.”

The city already bans food trucks from setting up shop in the downtown area. Elsewhere, only one truck is allowed per block.

But Moss said one truck has continuously set up in front of a pet shop, and is hurting its business. Another truck, he said, has taken away business from a pizzeria.

Muoio suggested incorporating into the city’s code some type of separation requirement between the trucks and existing restaurants.

Commissioner Keith James said the city should set up a designated “food court zone” in each district where the trucks would be allowed.

“It would be a nice little attraction,” James said. “We could even have them by Palm Beach Lakes, the old mall. Let’s just explore it.”

Commissioner Kimberly Mitchell said the food trucks serve a purpose, and the city should be careful before implementing more restrictions.

“A little hot dog vendor in front of Goodwill on Dixie, that would be considered the same thing,” Mitchell said. “I think it’s an enhancement to the experience of Goodwill, and it’s not causing a problem for anyone out there. There are restaurants in that area, but I have never heard a complaint. I don’t want us to do so much regulating that we’re taking the charm and experience out of our city and just forcing it into one location.”

Muoio also praised the food trucks, but said it’s a tough balance for the city.

“There are some cities that have places where mobile vendors can be and it’s a whole happening, with multiple vendors, people enjoy the food and it’s the place to be,” Muoio said. “It’s a cool thing to have happen in our city, but it’s impeding someone else’s business. I struggle with that and I understand there are (businesses) here paying taxes, although (the trucks) do have hard costs. A little competition is not a bad thing.”

Development Services Director Doug Wise said he would come back to commissioners with a revised code.