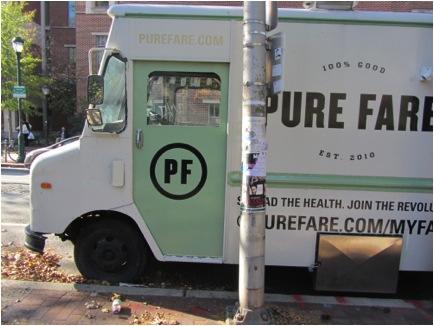 On Penn’s campus, it is difficult to resist falling into food cart patterns. When a new truck rolls along, you have to weigh the options: to enjoy the usual, or to sacrifice your perfect order and experiment with something new? Pure Fare Food Cart, on 40th and Locust, directed this question toward me for a couple of months. When I finally mustered up enough curiosity to try it, the truck when on a hiatus…and then I went home for the summer. But alas, the cart and I have both returned, and I hope that this truck is here to stay.

Pure Fare has a storefront on 21st and Walnut where I’ve scoped out the prepared foods before. Though the Pure Fare truck offers only a fraction of the number of selections, their menu — featuring ‘trendy’ ingredients such as kale, quinoa, and sweet potato — rotates every few weeks. Thus, University City’ers who become regulars will be able to try a wide variety of sandwiches, salads, and snacks. (Unfortunately, the nut milk-based frozen yogurts that they offer at their storefront location will not be making the menu anytime soon – despite my many pleas, apparently their cart cannot be equipped with frozen yogurt machine at the moment.)

Determined to picnic last week, two friends accompanied me on a trip to Pure Fare. On the menu, there were around 20 entrée options (half salad, half sandwich), all of which had calorie-counts alongside their descriptions. Also, there are a number of vegan options. The three of us found ourselves in particularly salad-moods, and I bought a couple of snacks to add to the mix as well. Here’s the rundown. 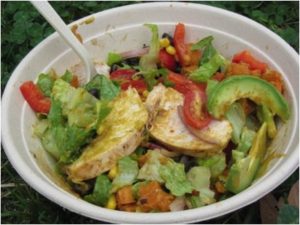 When I arrived at the truck, one of my friends had been surveying the menu for a few minutes. She had honed in on the Mexican Grilled Chicken Salad ($9.50), which she ordered and ate enthusiastically. The portion of chicken was generous, as were the tomatoes, avocado, jicama, onion, corn, beans, and sweet potato mixed throughout. I was lucky enough to snag a bite, and the dressing – an unconventional twist on a chili dressing – topped off the salad quite well. 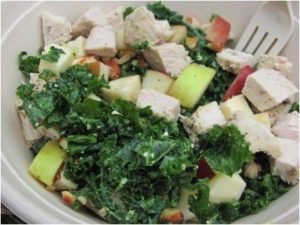 I went with the Chopped Kale ($9.50), a salad including turkey, apples, almonds, cheddar and parmesan lemon dressing. The sweetness of the apples complemented the bitterness of the kale, and the almonds added a satisfying crunch. The balance of ingredients made for a clean, refreshing salad, which was satisfying yet light. 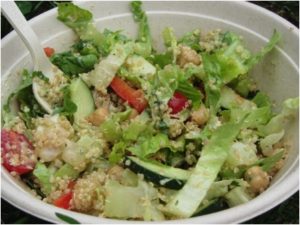 My other friend is a quinoa fiend (seriously, she orders boxes in bulk to keep in our pantry), and thus her order of a Naked Felafel Salad ($9) with quinoa was a no-brainer. The salad contained cucumbers, tomatoes, peppers, and chickpeas as well. Though the ingredients balanced nicely, the salad could have used a kick – perhaps something spicy – to add some zing to the fairly mild ingredients. 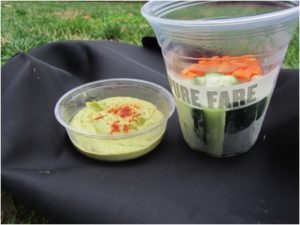 After gobbling up the salads, we moved onto our snacks. First, we delved into hummus, which comes with carrots and cucumber ($3). I’m typically a thick-hummus person, and this hummus is not so thick. Still, Pure Fare’s hummus is sprinkled with spices that offered a good twist on the usual spread. Also, the vegetable to hummus ratio was perfect. After all, it’s always a pity when you end up with too many carrots for you hummus, or worse yet – too few carrots to finish your hummus. 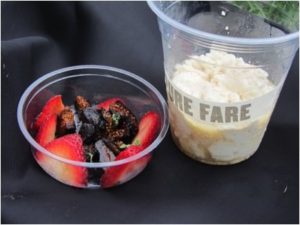 Next, we moved onto the ricotta with strawberries and figs ($3.75). The presentation of this snack made it a bit difficult to share; the ricotta was set deeply within a cup – too deep for maximal dipping capabilities. Also, the ricotta is not the most appealing-looking of dishes – but I suppose that no food cart can circumvent the cheese’s consistency. Once getting over the logistics and the aesthetics though, this snack was alright. Though the strawberries were a bit on the soggy side (perhaps because they’re no longer so in season….) the sweetness of the snack offered a nice ending to the meal.

And so, blessed with my own Pure Fare menu right on campus, my longtime envy of those that work around 21st and Walnut has ended. Some students complain that the menu does not rotate quite often enough. Yet for the time being, the Pure Fare truck offers a decent range of sandwiches, salads, and snacks – a perfect place to pick up on your way to class or with a couple of (girl)friends (not too many of my guy friends are satisfied with kale or quinoa, but perhaps an exploration into the sandwich portion of the menu will yield more man-friendly options). For the Magic Carpet’ers, the Metropolitan’ers, and the Sweet Green’ers of University City, the Pure Fare truck presents a new pattern in which to fall.

THE + (What somebody who likes this place would say)

THE – (What somebody who doesn’t like this place would say)