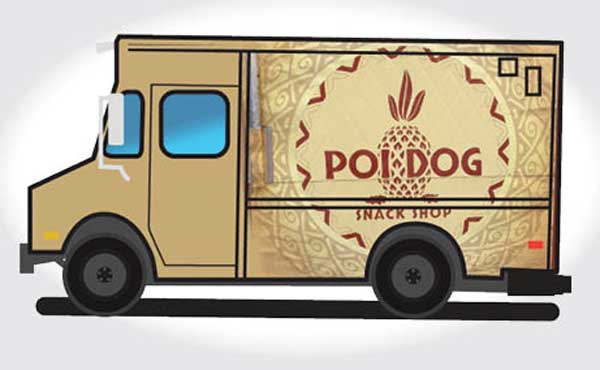 What is it? Philly’s first Hawaiian-themed food truck, operated by island expat Kiki Aranita and her partner, Chris Vacca. The duo took the lessons they learned while slinging hash at Foo Truck and added a Pacific twist, plating delicacies hard to find outside the 50th state.

Aloha, lunch crowd: The food cart, named after a now-extinct breed of dog native to Hawaii, debuted early last month, setting up an exclusive residency at 13th and Montgomery, smack dab in the heart of Temple’s campus. The compact operation is easy to spot among the area’s usual crowd of trucks thanks to its colorful, Polynesian-inspired exterior art.

Try this: Poi Dog plate lunches will set you back around $6 and include an entrée – such as smoky Kalua pork or sweet and savory Shoyu chicken – two scoops of white rice and a side of macaroni salad. There are occasional limited-run entrées; we really dug the special-order Mochi Nori chicken, fried with the classic Japanese rice cake and seaweed. And if you’re feeling adventurous, try the Spam musubi (read: fried Spam on sticky rice), a Hawaiian staple.

Taco time: If a light snack is what you crave, the cart offers the aforementioned entrées as Hawaiian Tacos, usually paired with black beans, cabbage slaw and island-inspired salsas.