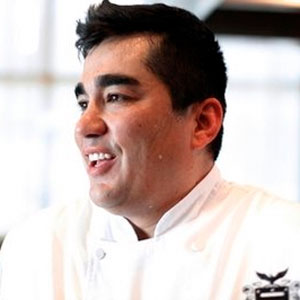 Pro athletes hit the gym to train for the big game. Jose Garces works out in the kitchen.

In addition to his role as owner of Amada, Tinto, Village Whiskey, and four other Philadelphia restaurants, Garces wears the starched jacket of an Iron Chef, one of seven culinary household names who battle challengers on the Food Network.

But it is serious business to the quietly intense Garces, who won his spot in November 2009.

He has his ego to protect and his brand to spread.

Once or twice a day for several weeks before he goes to New York City to tape a show, Garces and two assistants descend into a prep kitchen of his newest restaurant, JG Domestic at the Cira Centre, and stage a mock battle – cooking five dishes, all based on one key ingredient, in less than an hour.

“We don’t know what the ingredient will be [on the show], so we just put one out there and work off of it,” said Garces, 38, who allowed The Inquirer to watch a rehearsal on a recent morning.

“We need to feel the pressure.”

Garces cooked with it on an Iron Chef America battle shown in May. Blue cheese is a good ingredient for practice, he says, because it invites experimentation.

Garces and MacGregor Mann, the goateed chef de cuisine at Amada, and Dave Conn, the wiry chef de cuisine at JG Domestic, hash out a menu. The men have worked together since 2005, when Garces opened Amada, a refined tapas restaurant in Old City.

They know one another’s moves – all the better to avoid collisions as they slap pots and pans on a 3-by-5-foot flattop grill, sizzling at 450 degrees, next to a raging double oven and a burbling deep fryer. The setup is professional, but it’s not re-created to the specifications of Kitchen Stadium.

A year’s supply of butterfat.

An Iron Chef dish’s “techniques and methods have to be on a high level,” Garces says. “You get points for creativity and originality, but ultimately what brings victory is flavor and taste” – two attributes that audiences can only assume from the judges’ reactions.

“The portions shouldn’t be too big,” Garces says. Judges have to sample a lot of one ingredient, he says. You don’t want “palate fatigue.”

As the restaurant’s crew preps the day’s lunch on the other side of the kitchen, assistant chef Andrew Sabin sets the timer on his iPhone for one hour and says, “Go.”

When “Mac” makes croquettes for a similar salad at Amada, he preps them ahead of time. This batch will be done in real time. It requires freezing the croquette before deep-frying it. “It takes a full 40 minutes to make it and freeze it,” Mac says. “You only get one shot to fry it, and it’s real easy to get a fryer full of cheese evaporating away.”

That few of Iron Chef America’s 1.8 million viewers would even think of duplicating these recipes is not the point. They’re watching to see tempers flare, knives mince, and judges wince. If an appliance quits or a scalding pot hits the floor, that’s entertainment.

This rehearsal, though, is a clinic in calmness.

Garces acknowledges that he does not spend as much time in the kitchen as he did five years ago, when he had only Amada on Chestnut Street. Besides his seven Philadelphia restaurants – there’s an eighth on the way in the spring – his name is on a restaurant in his native Chicago, he’s developing a food truck called Guapos Tacos, he’s just bought a Bucks County farm, and there’s a second cookbook on the way. He’s also behind a line of foods, including vinegars, honeys, and coffee.

He’s a chef, but his life does not include working the line stuffing empanadas (as he did for his mentor, Douglas Rodriguez, at Alma de Cuba) or cooking the classic fish taco (as he did when he ran the kitchen at El Vez before he left the employ of Stephen Starr).

Garces’ Iron Chef career started in 2008 when he beat Bobby Flay on Iron Chef in a battle over melon.

It could not have come at a better time, Garces says: “I was getting into openings and becoming more of a business person than a chef.”

Training sessions “bring me back to having that time to connect with the chefs, and . . . allowed me to cook and be creative,” he says.

So while some may see the process as stressful, Garces sees it as therapeutic. The mornings when he is hunkered over a blender, Mac plating Serrano ham in front of him and Conn whipping eggs and Gorgonzola into a souffle to his left, are “a special time for me.”

“Being an Iron Chef gets you a certain amount of respect from chefs all over the world, but it also makes you their prime target for competition,” says Flay, who was among the first Iron Chefs when the Japanese show was appropriated for American television. “It changes your professional life as a chef forever.”

Invitations to food events do not stop. Competitors come through the door of Kitchen Stadium. And Garces sees a steady rise in business – and his celebrity quotient – since he won his first Iron Chef. He has taped a slew of episodes, of which Food Network has shown five (his record is 3-2).

The next is Sunday (10 p.m., Food Network), and Garces and challenger Mike Lata of FIG restaurant in Charleston, S.C., will use sparkling wine in holiday-themed dishes.

Garces would not divulge the episode’s outcome or describe his menu, but he will offer all five courses as a $65-a-person dinner this month at JG Domestic, starting Wednesday.

Blenders are silent. Pots and pans are scraped. Garces wields tweezers to coax escarole around the buffalo. Conn puts down a souffle and clucks that it is sinking a bit. Garces asks if he can make another. The next is perfect. The chefs look up from the counter. The five dishes are more than camera-ready.

Has it been an hour? Sabin looks at his iPhone and says with a grin: “Forty-five minutes.”