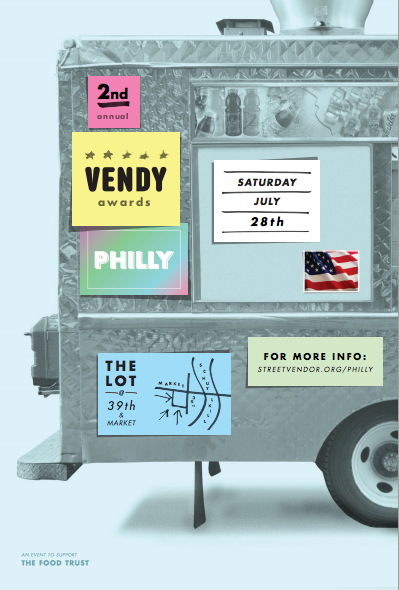 The Vendy Awards are an annual event organized by The Street Vendor Project at the Urban Justice Center, a membership-based organization of more than 1,300 vendors.  SVP’s famed Vendy Awards have determined New York City’s top street chef for eight years, becoming one of the most beloved and widely anticipated food events in New York, Los Angeles, and Philadelphia.  In Philadelphia, the Vendy Awards will serve as a fundraiser for The Food Trust, a Philadelphia-based nonprofit organization that strives to make healthy food available to all.  Follow the Vendy Awards on Twitter for the latest news and announcements @vendysphilly and like them on Facebook at Vendy Awards.

Tickets for the Philadelphia Vendys, an all-you-can-eat event inclusive of beer and wine, can still be purchased at http://phillyvendys2012.eventbrite.com for $55 in advance and $60 day of event.

ABOUT THE STREET VENDOR PROJECT AT THE URBAN JUSTICE CENTER

* Please note: these items are on the trucks daily and may not be served at The Vendys as each truck may want to create “extra special” specialties to wow the attendees and judges.

Anna Goldfarb (Emcee)  – A local author, humorist, and screenwriter, her first book, “Clearly, I Didn’t Think This Through” is a humor memoir about how terrible she is at being an adult. She writes the popular blog, Shmitten Kitten, and is a contributing writer to The Frisky and Hello Giggles.

Tony Luke Jr. – Twice hailed by Gourmet Magazine for quality and innovation, and covered by GQ, The New York Times and scores of other media, Tony Luke’s redefined the Philly Sandwich experience with specialty favorites.  Under his helm, the business has expanded into eight premier locations, making it one of the biggest success stories of the Philadelphia dining renaissance of the last two decades.

Joy Manning – Former restaurant critic for Philadelphia Magazine, Manning is a food writer specializing in restaurant coverage, recipe development, and culinary culture.  Her work has appeared in Details, Food & Wine, Relish, Cooking Light, The Philadelphia Inquirer and Serious Eats.  She is the co-author of “Almost Meatless” and most recently, worked at Prevention magazine as nutrition editor.

Lari Robling – Former food critic for the Philadelphia Daily News, and author of the internationally acclaimed cookbook “Endangered Recipes”, Robling produces sound-rich audio food segments for WHYY radio, and created a series of podcasts on the history of French cuisine for the American Philosophical Society Museum.

Marcie Turney – One of Philadelphia’s most prominent entrepreneurs, Chef Turney has worked for nearly a decade with partner Valerie Safran to transform the 13th Street neighborhood into Midtown Village.  Their businesses include restaurants Barbuzzo, Lolita and Jamonera; gourmet prepared food market Grocery, and lifestyle boutiques Open House and Verde, which is home to Turney’s signature line of chocolates, Marcie Blaine Artisanal Chocolates.