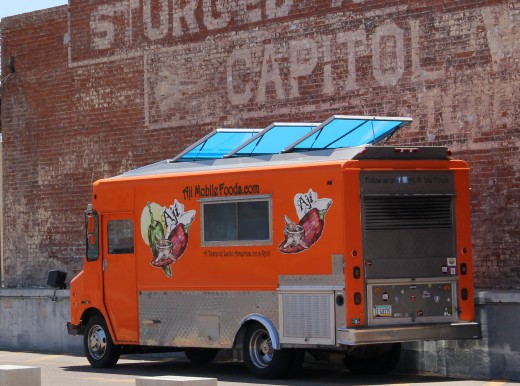 Step outside your down-the-street-sandwich-shop comfort zone and try one of these four prominent food trucks in the Valley, each serving internationally inspired fare.

Each truck’s regular locations are listed, but all are subject to frequent change. So follow your favorite truck on Facebook and Twitter for the most up-to-date schedules.

History:   It didn’t take long after graduating from ASU and culinary school for Giancarlo Alarcon to realize that his dream to own a restaurant was an expensive one. By his numbers, it takes a minimum of $250,000 just to open. So his father, Joe, decided to invest his retirement in his son, and together they opened a food truck with a menu built around the food they ate at home (Alarcon’s parents are of Ecuadorean descent).

Quick bite:  “People aren’t exposed to (Latin American food) very much out here, so it’s tougher for me to get going,” Alarcon said. There is more to Latin America than Mexico. Aji Mobile Foods showcases the flavors of Ecuador, Peru, Argentina, Uruguay, Cuba and Puerto Rico.

Recommended dish:  Owner Lorenzo Emerson de los Rios’ specialty is his carne asada Indian taco. “It marries both of my flavors, my Mexican bloodline and my Native American bloodline,” he said. Try the Jazzy, fry bread topped with pinto beans, carne asada and homemade pico de gallo made of fresh cucumbers, pineapples and mangos, with drizzles of chipotle sauce and creme fraiche on top.

History:  The Emersons have been frying since the late 1960s, when Lorenzo’s grandparents started selling fry bread to raise money for the Salt River Band. They were at the Arizona State Fair every year into the 2000s, and about a year ago, Lorenzo decided to start a truck to carry on the tradition. Today, their Mojave, Mexican-American and Diné ancestry lives on in Emerson’s traditional foods, from blue-corn mush to roast mutton.

Quick bite:   Menu items are named after Lorenzo’s three children, who go by D-Money, Muzzy and Jazzy and can often been seen around the truck. D-Money “has two items, so he walks around like he’s kinda tough,” Lorenzo said, laughing.

History:  Brian and Margita Webb traveled to her hometown of Lapu-Lapu City in the Philippines to marry, and the country’s flavors never left them. They brought those flavors home in the form of a Filipino food truck. 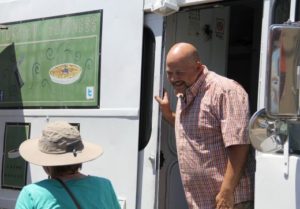 History:  “It was my wife’s idea for dessert, and my idea for the truck,” chef-owner Eric Ireland said of his decision to leave his management job in pursuit of dessert. The couple traveled the country to gobble up as many food-truck experiences as they could to help them come up with something unique. Now they’re about to celebrate three years of setting fire to dairy in a confined space.

Quick bite:     This 1974 vehicle is one of the oldest on the food-truck circuit and serves 30 rotating flavors made exclusively with organic, local ingredients.