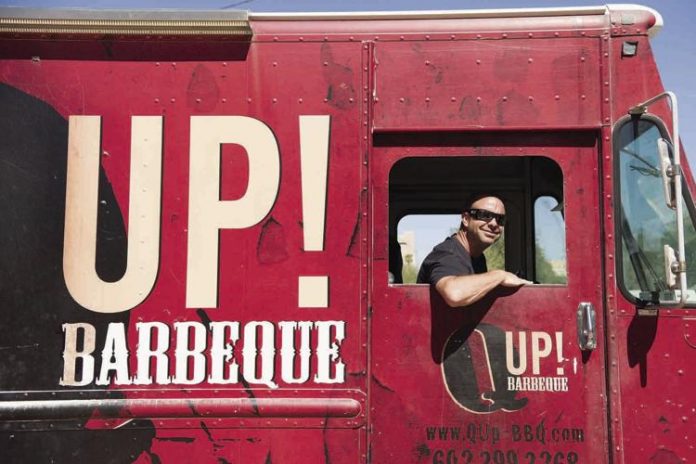 By Alex Gallagher | The Foothills Focus

Life for the Clough family was once much easier than it is now.

First, the North Phoenix family’s business was dealt a heavy blow when the coronavirus pandemic hit the United States, shifting customers to work from home and causing large gatherings to be prohibited. Then, Kat, the matriarch, was diagnosed with stage four cervical cancer in May.

“Financially, it’s been a struggle. What we’re normally used to is all of spring events carrying us through the summer when it starts to slow down,” said her husband and truck owner, Devin.

“With COVID hitting when it did, all of our big events throughout the rest of the year were canceled.”

Together, the family runs Q Up! Barbeque, serving award-winning barbecue to hungry customers throughout the Valley.

Founded in 2011, the truck is run by Devin, Kat and their three children Taylor, 21, Colin, 17, and Max, 6. They have spent most of their time away from home driving their rustic red truck with the glaring large black and red Q Up! logo on it around Phoenix feeding clients full of meats, laughs and smiles.

The meats, like brisket, ribs and pulled pork, are rubbed in a smoky, tangy barbecue sauce. The family also prides their truck on the upbeat attitude and the life lessons it has allowed them to teach their kids.

“The kids started when they were pretty young. Dating back to when we first started this truck, they’ve been able to learn lots of valuable lessons for responsibility, working, finances and overall, how to be good people,” Devin said.

Taylor was the first child to begin working on the truck, quickly followed by her younger brother Colin.

“I’ve been doing this since I was 12. Growing up working like that has given me a lot of life lessons and prepared me for being an adult,” said daughter Taylor.

“I love working with my family. It brings us together, and it’s fun to have inside jokes as well as goof around a bit at work, because not everything has to be serious all the time, and I feel like that’s how our world is right now.”

The business began when Devin broke his foot and while recovering did some thinking about what he would like to do as a career.

He had always had a love for food and cooking but hadn’t ever worked as a cook professionally.

Fast forward nine years, Devin now owns another truck, Gangsta Burger, and a company called Ride and Dine, which handles scheduling for other food trucks as well as advertising for them.

However, their finances have been troublesome this year.

All of their events during the spring were canceled when the virus hit, causing the family to scramble. Prior to the shutdown, Q Up’s main business model was set up to provide customers lunches. In addition, they would also offer dinner services at various parks and events around the Valley.

Kat’s diagnosis provided an extra strain, but there were two things that have helped the family persevere.

“It’s definitely something that has to be managed between the business and treatment to make sure all bases are covered, but she has a really good attitude, which helps a lot,” Devin said.

Kat’s optimism and positivity have allowed her and her loved ones to remain in good spirits as her journey has continued.

“She had surgery around August to get a tumor out of her uterus, so she had to recover from that, and that was pretty rough; but other than that, she has done really well,” Taylor said. “She only has one or two more rounds of chemo then some radiation, but she’s very strong.”

Kat also has a Facebook page titled “A Bucket of Sunshine” that people can post words of kindness to boost her spirits during this tough time.

Positivity has been a key element in this family’s struggle to adapt through the tough times, but another element has been the food itself.

“Food is just something that brings most people together. Whether it’s good times or bad times, a lot of times it won’t matter what differences you have. Everyone can always break bread together,” Devin said.

The business has also helped the family stay together and remain strong during circumstances that would likely break any other business.

“It makes our family stronger being able to work together, and it gives us something to rally around,” Devin said.

The family’s optimism appears to finally be paying off, as they are beginning to return to somewhat of a form of normalcy.

One of the biggest ways of returning to normalcy has been how they have spent their time away from food trucks.

When the family is not together cooking food for customers, they can often be seen at ice rinks supporting Colin, who plays for the U-18 triple-A junior Coyotes, their highest-level team, who have recently returned to play in tournaments across the United States.

“Being able to go as a family to one of his tournaments was really nice because we hadn’t done that in a while, so that was a nice bonding experience for us,” Taylor said.