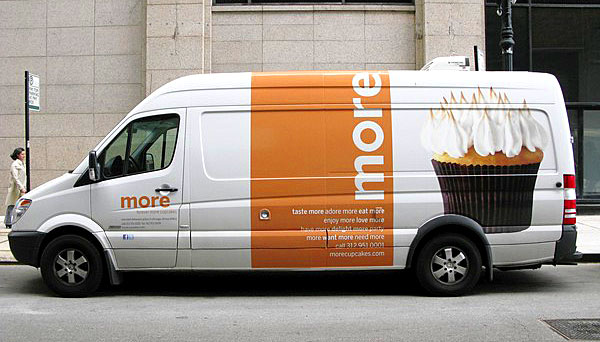 By ChicagoTribune.com
Chicago’s food truck scene is vibrant, gathering heroes (Matt Maroni of Gaztro-Wagon), stars (Foss) and cult favorites (the Mexican-wrestler-mask-wearing guys behind Tamalli Space Charros). Nearly 20 trucks will be out by the end of summer.From sausages to cupcakes, we help you navigate a movement that’s in overdrive.

One hurdle here, a relatively low hurdle: Empanadas traditionally are fried, brown and addicting, but these empanadas are baked, brown and addicting. That’s the hurdle. For this we are grateful, because we plan to eat the sweet corn empanada (chewy, creamy, a large pocket stuffed with fresh yellow nuggets) all summer. The price is right, the truck is fun, a sky blue ice-cream truck, with a big “5411” graphic on the sides; and the variety (six different kinds; $1.99 each) is ripe for return visits. The owners are three Argentine friends, Chicago transplants by way of Buenos Aires: “54” is the country code for Argentina, and “11” is Buenos Aires. These guys know their stuff.

Best bet: The specialty is puff pastries with different fillings ($1.99 each); try the sweet corn as well as the ham-and-cheese combo, a rounded pie of sorts spotted with deep brown bake marks and offering nuggets of sliced ham and a modest bit of mozzarella. Additionally: The rich caramelized onion empanada has a touch of dessert.

We love red velvet. Truly, deeply, madly we do. So does the rest of the city, apparently, as the Flirty Cupcakes truck can’t seem to keep those cupcakes in stock. Rich, with a hint of chocolate and cream cheese icing on top, it really is a perfect cupcake. Flirty owner Tiffany Kurtz says she decided to take the cupcake craze mobile after seeing a, er, competitor. “I saw an old ice-cream truck and got all excited like when I was a kid, and then I quickly thought, ‘Man, that thing is beat up and looks gross; guy is kind of creepy as well!’ And then it hit me: Update it and make it something grown-ups will want to chase again.”

The one bad thing about Matt Maroni’s otherwise crave-worthy postal truck-turned-culinary experiment? He can’t cook on his ride, so his flat, spongy Indian bread of choice — so good at his brick-and-mortar shop in Edgewater — becomes spongier as it sits, waiting for customers. Which is one reason Maroni has been the leading advocate for Chicago’s joining the food truck movement, going so far as helping to draft the legislation sitting in the City Council. That said, what’s not to love about a guy inspired enough to use pickled cherry with buffalo sausage? Apple chutney with duck confit?

Odd as it seems, considering Chicago’s culinary history, only now are we seeing a fancy sausage cart. Stranger still, the origin: Rich Levy, who drove one of Phillip Foss’ Meatyballs trucks and caught the food truck bug, grew up in South Africa. His menu is a clever triptych through Midwestern bloat (Wisconsin brats), his brief stay in the Middle East (hot lamb Marrakesh sausage with roasted eggplant), and South Africa (a mellow, almost American-ish boerewors farmers sausage, topped with onions and beans).

Best bet: Among the truck’s specialty homemade Afro-Midwestern sausages ($8 each) is the Sheboygan brat (with mustard-seed sauerkraut and cheddar). Additionally: Served on a soft roll, sausages are plump, if not especially distinct from one another. (And why offer “crisp” onion topping for an otherwise fine mint-spotted lamb sausage when you can’t fry anything on-site yet?)
Score: 2.5 trucks
— C.B.

This is certainly the most slobbered over by other truck owners for a couple of reasons: No. 1, because it operates in Evanston, which has a food truck ordinance, cooking is done on the Hummingbird; No. 2, it’s a sweet ride, a customized (for roughly $100,000), 28-foot-long mobile kitchen with two stoves. The owners run Campagnola and Union Pizzeria, so occasionally the best offerings of executive chef Vince DiBattista hit the roving menu. “But mostly, it’s all original, made for the truck, different all the time,” says Heather Behm, one of the partners. The truck goes out twice a week, tops.

Best bet: The stars among the lunch classics (grilled cheese, cup of soup, etc.; $5 to $7 a dish) on offer are meatballs in tomato jam; braised lamb sandwich. Additionally: Honey gelato between lavender shortbread, short-rib tacos — made to order! Imagine! Nothing wows, though. But nothing disappoints, either.
Score: Three trucks
— C.B.

If the Chicago City Council ever changes the law to allow cooking on trucks, the fleet of Meatyballs trucks (now three strong) probably won’t be joining them. “We might have,” says chef Phillip Foss, if Chicago’s drawn-out process hadn’t taken so long, but instead he found kitchen space on the West Side and has his operation humming, cranking out a few hundred sandwiches a day in varieties that touch on every double entendre possible.

Best bet: The traditional meatball subs ($3 for “grenades” and $7 to $9 for “torpedoes”) are good, but the Thai’d Balls are even better. Additionally: A modified Waldorf salad mixture pairs short rib and bleu cheese. There’s even a Veg’ta Balls for nonmeat eaters. The BBQ balls, slow-roasted pork shoulder with red cabbage, apples and cola-based sauce with a little bourbon, are excellent.
Score: 3.5 trucks
— S.C.

Befitting a food truck that’s a spinoff from a Gold Coast cupcake boutique, Patty Rothman’s More Mobile rolls along in a tricked-out, $162,000 Mercedes, with a custom window that recalls the shop’s minimalist, white-on-white display cases. It’s also doing well enough that Rothman — whose surprising flavor creations (maple bourbon, chocolate and champagne, BLT; $3.50 to $5) brush nicely past the trendiness of the cupcake itself — is considering a second truck (and even began applying for suburban food-vending licenses). Weight watchers, please note: The passion fruit meringue is a mere 220 calories.

Best bet: The goat cheese with apricot mousse (going out on a limb here is rewarding). Additionally: The truck holds about 15 flavors a day, from yellow cake with a liquid caramel center (sprinkled with black Hawaiian lava salt) to a cupcake with a grapefruit and gin filling.
Score: Four trucks
— C.B.

It all started with a simple premise: Who doesn’t love mac and cheese? The answer, apparently, is “no one” as the mac-and-cheese truck launched by The Southern has sold out almost daily since launching just after the blizzard in February. As successful as it has been, we wondered how many people will line up for mac and cheese ($9) when it’s 85 outside instead of 15. Executive chef Cary Taylor isn’t worried. “Everybody wants a hot lunch,” he says. “And that weather is only going to last for about a month.” He’s preparing a couple of pasta salads — all macaroni based — just in case.

Best bet: The bacon, blue cheese and apple mac and cheese. Additionally: Taylor says that the truffle smoked Gouda or the white cheddar may be his best-selling items, but for our money that bacon and blue cheese with apple hits that perfect sweet/savory/smoky spot.
Score: Three trucks
— S.C

Now here’s an interesting story: Nahum St. Martin and wife Laviyah Israel bought an old food wagon from Soul Vegetarian on 75th Street. “My husband cooks, and people would come over and they’d go, ‘You need to sell this food,’ but we didn’t want to open a restaurant.” Instead, they owned a small vegan cheese business, then started a truck. OK, now this gets interesting: In January, two months after launching the truck, St. Martin went to jail in Cleveland, sentenced to six years for mortgage fraud. Anyway, the truck continues. Israel makes the food, using her husband’s soul-vegan recipes.

Best bet: The large, spicy and addictive cheesesteak ($10), made with seitan, vegan Gouda, Muenster and pepper jack; Tuesday and Wednesday only (by request, Thursday and Friday). Additionally: The wings are a soy meat substitute with sugar cane sticks for bones. There’s a basil and tofu sandwich, on focaccia.
Score: Two trucks
— C.B

The mobile offshoot of the bakery started by the Rev. Stan Sloan, the longtime CEO of Chicago House, the SMG truck offers brownies, cookies and cupcakes with 100 percent of the profits going to help formerly homeless and HIV-affected men, women and children. The truck launched in January, and SMG’s Dana Lieberman says the response has been good. “People can’t seem to get enough of cupcakes from a truck.”

Meet the Sweet Ride, the love child of two reality shows. After a marathon of “Cake Boss” episodes where commercials for Food Network’s “Great Food Truck Race” kept playing, Lupita Kuri began doing research on opening a food truck of her own. She ended up buying her truck and the business from the winner of the last season of “The Apprentice.” “It was an entire business in a pink box,” Kuri says. Unlike the cupcake trucks, Sweet Ride also carries whoopie pies, puddings and cake pops, small balls of cake dipped in icing or chocolate.

Best bet: The banana pudding ($4), layered with vanilla wafers, with a touch of vanilla in the whipped cream on top. Additionally: The whoopie pies ($3) are delicious, and we’re still coming down off of a sugar buzz from the tasty sweet potato cake pop (rolled in maple cinnamon cream cheese frosting).
Score: Four trucks
— S.C

It’s disconcerting to order lunch from guys wearing Mexican wrestling masks and sombreros. Partners Manny Hernandez and Pepe Balanzar, who met working at Frontera Grill, were “inspired by Mexican sci-fi wrestling films and thought that twist would help make it interesting,” Hernandez says. They play Mexican cowboys (charros) astride a “tamale spaceship.” You rarely see them without masks. The refreshing thing is that the gimmick is a bright note on top of some smart cooking. There are six kinds of tamales, two meat, two veggie, topped with panela cheese, chili and garlic sauce.

Best bet: The pibil-style shredded pork tamale or the roasted beet and goat cheese tamale; Coca-Cola served in bottles, as God intended. Additionally: Tamales are ideal for a truck unable to serve made-to-order food, with each creamy tube of masa steaming nicely in its husk. All tamales are very large ($7; two to an order). Look for summer to bring salads and cold avocado soup.
Score: Four trucks
— C.B.