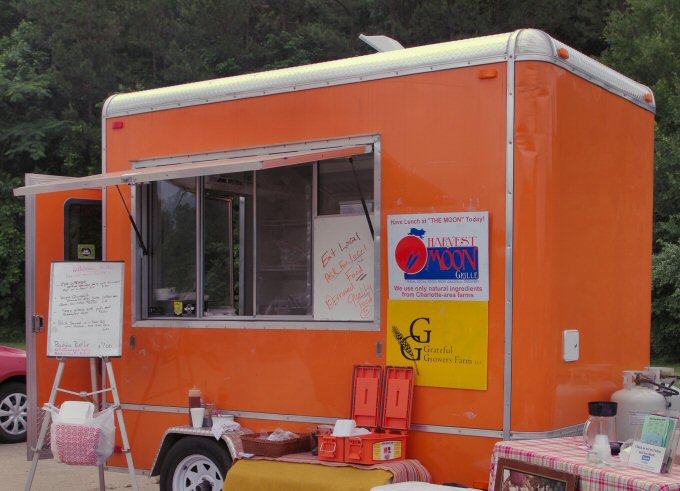 CHARLOTTE, N.C. — Anyone looking for a quick bite to eat in uptown Charlotte this week might notice something missing.  A bright orange mobile food truck near the Square is gone.

The Harvest Moon lunch truck usually sits between the Bank of America building and Chima Brazilian Steakhouse on S. Tryon Street. When it’s not serving, it is parked at Friendship Trays, south of uptown.

Parsons is both a chef and a farmer, and her truck sells food prepared from locally-grown ingredients, including pork from the farm she shares with co-owner Natalie Veres in Lincoln County.

All of the ingredients are bought within 100 miles of Charlotte, and most of it comes from even closer — within 40 miles.

Parsons said the truck — and the newer restaurant it helped create at the Dunhill Hotel on S. Tryon Street — don’t just support her farm and restaurant businesses, but farmers all over the region.

“In nine months, I have literally bought $169,000 of local food within 100 miles,” said Parsons. Over the two years she’s owned the truck, she believes the investment has been much higher — nearly half a million dollars.

She estimates the new restaurant alone has had a $1.1 million impact on Charlotte’s economy.

“Our farmers are winning, our guests are winning, my restaurant wins — the guy that fixed my truck wins. There are so many wins out of all of that,” she explained.

Parsons estimates that without the mobile food service truck, she’ll lose about $12,000 a week. She will try to serve boxed lunches from a tent in the same spot while she looks for her big orange truck, or finds a new one.

She will also create a quick patio service at her restaurant a few blocks away.

Parsons said she hopes it makes up the difference because when she doesn’t sell food, she doesn’t buy ingredients from local farms — so those farmers lose too.

“So you do the math,” said Parsons. “That’s a lot of impact thats happening this week.”

Anyone with information about the Harvest Moon truck should call Charlotte-Mecklenburg police, or Crimestoppers at 704-334-1600.