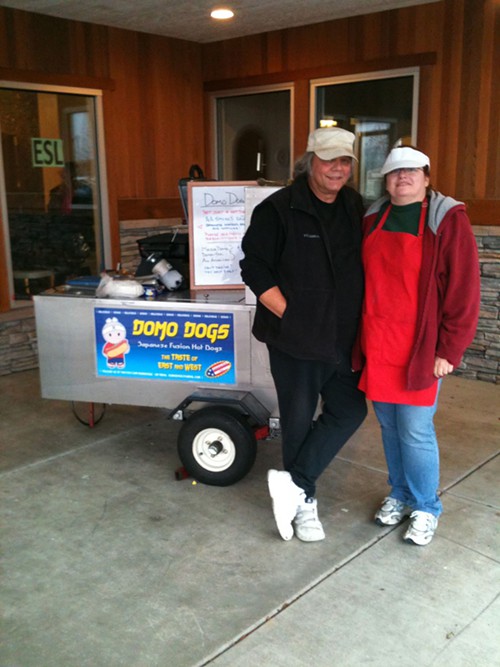 Posted by Andrea “the Intern” Vedder

I found Budd and Grae Lewis outside of the Springwater Church Holiday Bazaar in Gresham this weekend.

The Lewises own Domo Dogs, a Japanese-fusion hot dog cart that has no permanent location—much like the Lewises, who became homeless last year.

Until then, they’d owned a lovely and modest home in St. Helens. Budd Lewis used to be a successful writer and animator who worked on TV shows like “Smurfs” while Grae Lewis worked as a technician designing Intel chips. Just before the economy crashed, Grae left her job to retrain as a publisher, anticipating that her job at Intel would either be outsourced or rendered “obsolete”. But tuition at her Vancouver, Canada, college was much higher than expected, and the Lewises quickly ran out of savings. To make matters worse, their renter bailed and the couple’s home was foreclosed on—a fact they learned when they pulled into their driveway and saw a ‘For Sale’ sign.

Approaching rock bottom, the couple decided to reboot their lives with a food cart. While living in Vancouver, Grae and Budd had noticed the success of a Japanese hot dog cart called Japa Dog. The Lewises liked the Japanese-fusion hot dogs served there, but Budd was pretty sure he could do it better. On Friday nights, he whipped up Japanese sauces and experimented with flavor combinations for his and Grae’s dinner. Realizing that Budd was onto something good with his Friday night dinners, the pair rallied for seed money for their cart. Grae emptied her 401(k), Budd sold the rights to one of his comic book characters, and Domo Dogs was born.The hot dogs they dished up outside the Gresham church were no disappointment. The menu is to-the-point, offering just two options: the Major Domo (dressed with teriyaki onions, flaked seaweed, sesame seeds, sweet chili sauce and Ponzu-mayo) or the Domo-Yaki (dressed with daikon sprouts, coconut-cream peanut sauce, sweet chili sauce and teri-mayo).

The hot dogs are so good that I willingly consumed mayonnaise for the first time since fourth grade.

More on Grae and Budd’s cart below the cut!

The Lewises have gotten a couple helping hands: Bo Kwon (who runs Korean taco cart Koi Fusion) got to know the couple and has served as sort of a food cart big brother to Domo Dogs, inviting the Lewises to accompany Koi Fusion around town.

Also, last week the Huffington Post published an article about Domo Dogs as part of their Impact 2.0 project, which is “rounding up stories of former middle class families who are struggling to stay afloat in the recession”. The Lewises decided they fit that bill and so they e-mailed HuffPo; according to Budd, they submitted their story “in the hopes that others would see that there is something each of us can do to survive in the worst economy since the Great Depression.”

While the couple says HuffPo “used some creative license” with their situation to stress their struggles, Budd and Grae view their story as one of success.

The Lewises may not have been able to afford an all-weather covered cart, which is arguably necessary for Portland’s wet weather, or a permanent food pod location, and as it stands Domo Dogs is doing just a bit better than breaking even, but “at least this way we can feed ourselves,” Budd said.

They were also fortunate enough to be offered a spare room in the home of former co-worker, although the arrangement is only temporary because that home is also being foreclosed on. Still, the hot dog-dishing couple is upbeat about their future.

“This is Chapter Three in our lives,” the Lewises wrote in an email to me after I tried one of their dogs. “We’re determined that the ending will read, ‘And they lived happily ever after.'”