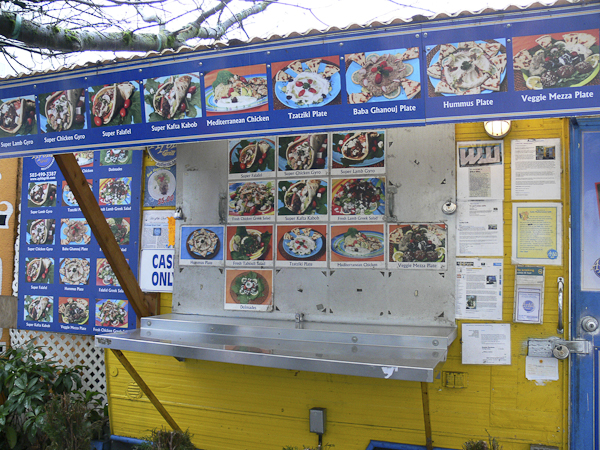 When a new food experience takes off in a neighboring city, capturing the fancy of foodies, city planners and researchers alike, we might well ask – why there and not here?   Such is the case with Portland’s food carts, the new standard for cultural creativity and entrepreneur-driven economic development.

This past week my partner and I were in Portland for a post-holiday holiday and we marveled at the number of food carts that have sprung up across the city – not just a cart here and there, but whole city blocks of carts – serving not just hot dogs and popcorn, but every kind of cuisine and taste temptation imaginable.

Picture a downtown parking lot: instead of the typical drab blanket of cars, you are treated to a colorful mix of carts alongside throngs of people scoping out the offerings.   Although we did not partake, (it seriously rained the whole visit and many of the carts were closed as it was Sunday and the day after Christmas), we did get an idea of how much the carts contributed to the vibrancy of the city’s culture.

So what are some the factors that have made Portland food cart heaven?

First and probably foremost, Portlanders value both quirkiness and the entrepreneurial spirit.  They don’t find the hodgepodge of food cart architectural styles unsightly but appreciate how they add up to a lively street scene.

The scale of the city is another vital factor in the evolution of Portland’s food cart pods.  The city’s small blocks, the smallest of any major U.S. metropolitan area, create a more intimate landscape, well suited to food cart proportions.

Portland’s permissive regulation of food carts are also frequently cited as decisive.   City officials have publicly adopted a stance of not intervening when unnecessary.   In Seattle, there are limits on what can be sold from public sidewalk carts (hot dogs, anyone?) but probably even more restrictive is the requirement that carts return to an approved commercial kitchen each night to dispose of grey water, wash the dishes, and refrigerate food.  Even carts located on private property, which are not regulated as to what food they can sell, must make the nightly journey.

In other words, in Seattle carts really do have to be mobile, whereas in Portland carts are considered mobile as long as they have wheels.   This has allowed carts to congregate together in pods and develop external amenities like awnings and porches for seating.  It should be noted that in Portland health regulations are the same for restaurants and food carts.  That food carts are not subject to the same health regulations in Seattle has been a point of contention with restaurants.

Lastly, in Portland, private property owners were quick to see the economic possibilities of developing food cart pods.  Most of Portland’s 500 plus carts are parked on private land.  Typically, leases run from $300 to $600 a month.  Now developers are jumping on the bandwagon with intentional pod development to spur neighborhood renewal.

These factors help explain why the food cart explosion happened first in Portland but there is also a great deal of interest in the food cart phenomena as a model for economic development.  After all, the economic doldrums are not unique to Portland.  Two ways in which the food cart business model differs from that of restaurants is the low cost of entry and direct sales.

While you might find a used food cart on Craig’s list for as little as $2,000, the average cost of a cart is somewhere around $15,000.  This still puts it in the range of a feasible dream for most people.  The low start-up costs make it a very attractive livelihood for immigrants.  Significantly, more than half of Portland’s food cart vendors were born outside the U.S.   Immigrants are joined by culinary institute grads who are finding the cost of opening a restaurant in down times economically prohibitive.  The lower costs of owning and operating a food cart also make the food more affordable and more affordable tasty options makes food carts popular with a wide swath of customers.

The other thing that makes the model work is direct sales.  Carts give chefs the opportunity to directly connect with their customers, something that is often difficult to accomplish in a restaurant when the kitchen is hidden in the back.  Direct sales are of course the hallmark of the local food economy.  Not incidentally, many food carts specialize in local food fare.

So food carts look to become a major piece of the economic localization puzzle.  For myself, I am planning another trip to Portland when the rains let up.

Many of the facts in the above article are sourced from Kelly Rogers and Kelley Roy’s Cartopia: Portland’s Food Cart Revolution, published in 2010 by Portland’s Roy Rogers Press.  It also has lots of cool pictures.