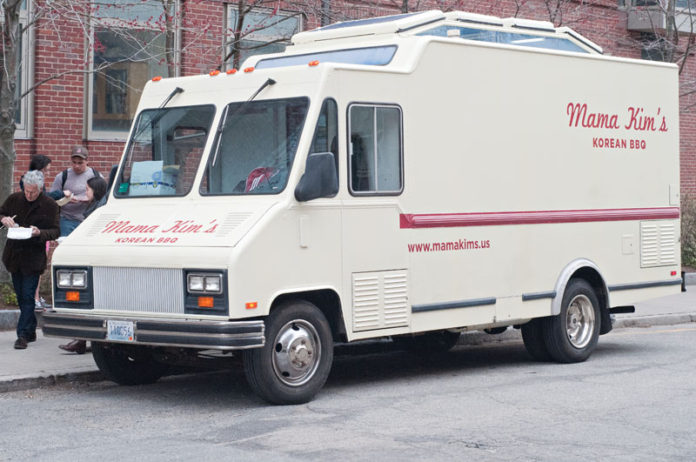 If you know anything about the Providence food scene, you know the East Side is now Big Mama (Kim’s) house. If you’re anywhere on College Hill during lunchtime or late-night, the smell of this truck’s delicious Korean cuisine is sure to draw you in.

For evidence, take a look at these bulgogi (shaved beef sirloin) tacos, in a house marinade, and topped off with their house salad and a scallion mushroom mix.

For now, there are no plans for their current truck to take a trip downtown. “This truck will always be here to serve Brown students,” said Hyun Kim, cofounder of Mama Kim’s mobile restaurant and Brown University alum. So if you don’t live on the Hill, you will have to venture up to see the truck as of now. However, Kim made it clear that the rest of Providence will be seeing a lot of Mama Kim’s very soon.

“We have plans to open run two more trucks, alongside with an HQ that will be prepping the food. This truck will stay on College Hill, one will sit near Kennedy Plaza, and the last will roam the rest of Providence and other parts of Rhode Island.”

Kim is confident that this aggressive expansion will be successful based on the reception he has received so far. He reported that people have gone so far as to personally thanking him for bring Korean food to RI. Others have congratulated him on an excellent business model. One notable figure being Kim’s mentor and professor from Brown, Barrett Hazeltine, who taught Kim in an independent study where the idea of Mama Kim’s originated.

Not a food truck – a mobile restaurant

“At first I wanted to start a restaurant, but the leases for a storefront were ridiculously high around Thayer St. Then I read an article on how gourmet chefs were going mobile. I knew Mama Kims would fit perfectly in that model. We don’t like the term food truck. Mama Kim’s is a mobile restaurant.”

Whenever the truck is serving there is sure to be a line, so expect to some. Kim credits the success so far to a few important factors. He stated that people want high quality, slow cooked food at affordable prices and fast. Also, the company follows the ideology of when the customers win, the business wins, and then the suppliers win. All suppliers to the restaurant are local, which means their ingredients are always fresh.

The young “mobile restaurant” entrepreneur explained that the city of Providence has been great to work with so far. “We basically can’t park by the Dunkin’ Donuts Center or by a meter, which is fine for us. We have a perfect spot here on Thayer Street.”

Providence has proven to be an excellent place to start a mobile food operation. Greater Kennedy Plaza is in the midst of organizing a revitalization of the park, which will feature the best food trucks in RI. Mama Kim’s has been the first to sign on as a featured truck.

Compared to other cities, Providence is low on regulations for these types of businesses. In Atlanta, food trucks are required to serve their food no longer than 30 minutes in the same area. There has been no indication that these types of regulations are coming to the city.

Kim gave advice to anyone who was thinking about getting into the food truck business. “You have to be customer oriented, rather than money oriented. It’s not just about the bottom line.”

To find out more about Mama Kim’s, visit the Web site here.