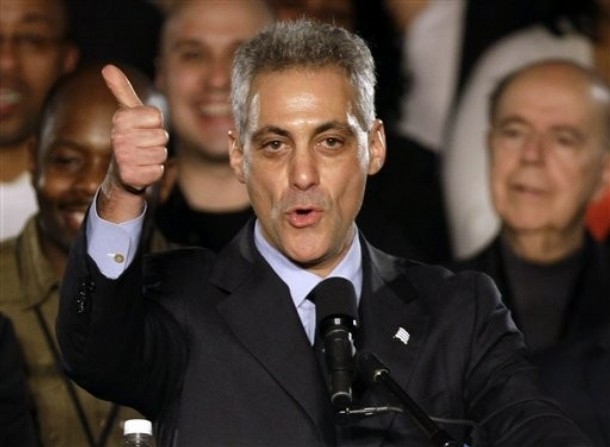 From the White House on Tuesday night, President Obama issued a statement lauding former Chief of Staff Rahm Emanuel on his “well-deserved victory” in the Chicago mayoral race. (Above: Emanuel celebrates on Tuesday night)

“I want to extend my congratulations to Rahm Emanuel on a well-deserved victory tonight,” President Obama said. “As a Chicagoan and a friend, I couldn’t be prouder. Rahm will be a terrific mayor for all the people of Chicago.”

Emanuel also got a call from his old boss, and told his supporters about it at his election-night party at campaign headquarters.

“I just talked to President Obama, who sends you his love and affection for his hometown,” Emanuel said, and the crowd burst into applause.

In addition to Obama love and support, Emanuel, 51, has First Lady Michelle Obama’s Let’s Move! campaign as the model for his plans to revamp Chicago food policy. During his long and highly contested campaign, Emanuel vowed to create a series of policy changes that will turn America’s third largest city into a Let’s Move! metropolis, to simultaneously combat hunger and obesity. Emanuel is replacing Mayor Richard M. Daley, who’s ruled the city for 22 years, and his food policy plans will bring Chicago not only in line with the White House orbit, but with the most forward-thinking food policy ideas of the 21st century.

Let’s Move! has a goal of eliminating food deserts within six years, and Emanuel pledged to erase Chicago’s food deserts by putting a grocery store in every neighborhood. He also said he’ll work to change zoning and cut bureaucratic red tape so urban agriculture can flourish, and will assist local businesses and non-profits in “securing” urban land, and selling their produce on-site. Current city ordinances prohibit or restrict this, and Emanuel will be focusing on Chicago’s South and West sides for urban ag development.

After-school and job training opportunities will come from these food and growing projects, too, according to Emanuel.

Emanuel also wants Chicago to have more food trucks with on-site cooking as another way to improve food access and affordability. The Windy City lags behind other big cities in the food truck trend, but Emanuel sees this not so much as a gustatory deficit but as a gap in food access. He’s pledged to “support a city ordinance to expand licensing for these trucks while ensuring that local small businesses aren’t negatively affected.”

Let’s Move! includes all these goals; Mrs. Obama has even mentioned Detroit’s Peaches and Greens food truck fleet in her campaign speeches, which bring fresh healthy foods to neighborhoods in food deserts. Emanuel also has plans to make Chicago the most bicycle friendly city in the US, which is in keeping with the fitness component of Mrs. Obama’s campaign, which encourages kids to walk and cycle to school.

Emanuel made his food policy announcement in February after a visit to the Chicago-area offices of Growing Power, an urban agriculture business that works to provide high-quality, healthy, affordable food to all residents in the community. Will Allen, the founder and CEO of the Wisconsin-based Growing Power, was a featured speaker when Mrs. Obama launched Let’s Move! at the White House on Feb. 9, 2009.

Emanuel is a former Congressman, and he’s very familiar with food policy, politically and personally: His Chicago place of worship, a Jewish temple, runs a CSA program (Community Supported Agriculture). His brother, Zeke Emanuel, was one of President Obama’s health care advisors, and also an advisor for the Let’s Move! campaign before he, too, retired from the White House. Current Chicago Mayor Daley’s brother, Bill Daley, is now President Obama’s Chief of Staff.

The text of Emanuel’s food policy plan, from his campaign office:

More than 600,000 of Chicago’s three million residents live in neighborhoods that lack access to fresh food. Located primarily on Chicago’s south and west sides, these “food deserts” make it difficult to purchase healthy and fresh fruits, vegetables and meat. The lack of a store also cripples a neighborhood’s ability to attract economic investment that will lead to job growth, and creates areas that show significantly higher rates of health problems. A recent study found that, among those living in neighborhoods with the worst access to fresh food, 1 out of every 100 residents die from cardiovascular issues – nearly double the rate found in areas that have access to grocery stores. While there is no simple solution to eradicate food deserts, the public health and economic development consequences require action.

A grocery store in every neighborhood

Rahm’s plan to combat food deserts is based on finding creative solutions that draw on the strengths of the public-private partnerships, community organizations and corporate investment. Send a clear message to retailers: doing business in Chicago requires doing business in all neighborhoods.

Grocery stores and other retailers are finding that underserved communities can often serve as profitable locations for new investment. As an example, last year Walgreens started selling an expanded selection of food, including fresh fruits and vegetables at ten stores in Chicago that were selected specifically for their location in food deserts. As mayor, Rahm will hold meetings with corporate leaders to encourage them to continue diversifying their food options as they seek permitting to open stores in more affluent neighborhoods.

While large chain stores are certainly part of the solution, Rahm will also make small- and mid-sized independent food retailers an integral part of his plan. Rahm will leverage federal programs like President Obama’s Healthy Food Financing Initiative and the Federal New Markets Tax Program, which enables companies to get federal tax credits for investing in projects in economically distressed communities, to increase food options while generating economic development.

Other cities and states have seen success with these programs, which can be easily replicated in Chicago. In the state of Pennsylvania, the use of these programs has increased access to healthy food for 400,000 people, while creating or retaining 4,860 jobs. Other options that will be considered include giving employers a tax credit of $1,500 for every employee hired from within a food desert zone. Additionally, retailers may be eligible for tax-exempt bonds for use on a variety of store upgrades – from the actual purchase of a building to equipment, or even product purchases.

For centuries, Chicago’s fertile land has been used to grow fresh produce and create employment opportunities. But today, city government stands in the way of a renaissance of local food production by limiting the size and revenue potential of these enterprises. Rahm wants to break down these barriers and help local businesses and non-profits to secure land, sell their produce on-site, and create after-school and job training opportunities. The initiative will focus expansion on Chicago’s south and west sides where large food deserts prevent communities from accessing fresh and healthy produce.

Cut the bureaucratic and regulatory prohibitions on urban agriculture

On Chicago’s south and west side, community efforts are already underway to convert empty plots – often in a state of urban ruin and a hub for crime and drugs – into community gardens. Rahm recognizes the value of these community-initiated efforts and wants to support them by cutting the arcane zoning regulations that make it difficult for community gardens to thrive. Previous efforts to open community gardens and farms in the city have been stymied by a lack of clarity around the zoning ordinances. In one instance, it took two years to open a single community farm simply because of the regulatory red tape.

As mayor, Rahm is committed to eliminating these bureaucratic and regulatory obstacles so that Chicagoans can exercise their innovation and more readily develop agricultural solutions that meet their needs. In addition to updating the zoning guidelines, Rahm will also help develop a set of Site Guidelines, which will guide community and commercial garden installations to ensure that community gardens are able to be run in efficient and cost-effective manners.

Current Chicago laws prohibit businesses from operating in residential zones without rezoning. While this makes sense through most of the city, it prohibits food grown on agricultural plots from being sold on-site. Rahm will work with the City Council to reform the zoning code so that fresh produce can be sold where it is grown. This will have particular impact on Chicago’s south and west sides where non-profit organizations are turning blighted lots into agricultural plots.

Mobile food trucks are a staple in many American cities, but Chicago lags behind. These trucks provide freshly-prepared food in neighborhoods across the city. Rahm will support a city ordinance to expand licensing for these trucks while ensuring that local small businesses aren’t negatively affected. The new policy would reform the city’s existing regulations that prohibit most forms of street food vendors. By expanding the variety and number of food trucks, Chicago can promote a new industry that creates good jobs and expands access to fresh food.