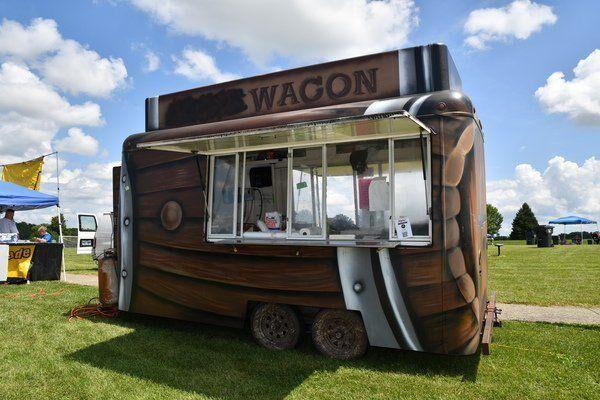 When a Facebook post from a Richmond fire inspector was made in a Madison County food truck group regarding new equipment requirements, several area vendors presented a mixed-bag of emotions.

Some were for it, others were hesitant-but-understanding, and a few vowed to not renew their business license in the city of Richmond altogether.

The truck’s last day of operation was Nov. 15, after the business partners heard of the several-thousand-dollar update they would need, in order to keep on, and decided to opt out.

On Aug. 27, a post was made alerting food truck vendors of new equipment requirements to take effect Jan. 1, 2021.

The post stated this was an “initiative by (the Richmond Fire) department to help ensure that mobile food vendors operating in the city will be safe while serving their patrons,” in efforts to prevent or mitigate fires.

Now, food truck vendors that “produce foods that produce grease-laden vapors” (stovetops/flat-tops or deep fryers) are required to install a type-1 hood fire suppression system to operate in the city of Richmond.

In addition, vendors will be required to have a class K and class ABC extinguisher which will all be inspected annually by RFD in accordance with Richmond Ordinance 19-24 regarding operation of mobile food unit vendors in city limits.

Hamilton stated while the inspection was noted in the original ordinance, the specific need for an entire hood, fire suppression system, was not.

“It’s hurting small businesses,” Hamilton said. “It is one step forward and two steps back.”

The new requirements come almost exactly one-year after the original “food truck ordinance” was passed by the Richmond City Commission. Even then, vendors and officials in the city had several meetings to re-draft the document to make it fair for all parties.

“…The one thing we left to chance, it bit us. It bit everybody,” Hamilton stated of the ordinance which requires RFD to sign off on inspection, annually.

While he said he no longer has a dog in the food truck fight, Hamilton, who co-owns Dreaming Creek Brewery, said he has already lost a food vendor because of the new equipment necessity.

“(Dreaming Creek) will suffer because of this,” he said. “We rely on (food trucks), parasitically, as they rely on us.”

On Saturday, Winchester-based food truck, Bells on Wheels, finished out their season at DCB with no plans to return in 2021.

Scott Bell, who owns and operates the truck with his wife, stated it was an extra expense on food vendors who don’t make much during a global pandemic.

“We have lost events, such as festivals, that are income drivers that could generate an investment during a pandemic where we are all seeing some kind of crunch,” Bell said. “It is isolating folks from operating in Richmond.”

But according to Richmond Fire Department Chief Sam Kirby, that is certainly not the department’s intention.

Kirby stated the suppression system is required due to a change in the National Fire Protection Association’s recommendation as far as what a food truck should have for fire safety.

According to the NFPA code 96, chapter 11 of the 2021 edition of the Standard for Ventilation Control and Fire Protection of Commercial Cooking Operations, it states under general requirements: “11.1.1 Fire-extinguishing equipment for the protection of grease removal devices, hood exhaust plenums, and exhaust duct systems shall be provided.

11.1.2 – Cooking equipment that produces grease-laden vapors shall be protected by a fire-extinguishing system for the protection of grease removal devices, hood exhaust plenums, and exhaust duct systems.”

“We understand that it is a large cost to do that,” Kirby said. “But we have two or three (vendors) that have already complied with it and they have taken that step to be safe.”

And while he said his department had received some concerns, he and other officials in RFD felt they had given plenty of time for vendors to accommodate before Jan. 2021.

“Everybody has been given plenty of notice, months in fact to kind of save up and prepare for this,” she said.

Bowles, who spent $2,600 installing the system on her own truck, said she felt it just needed to be done.

“If you are working on a food truck and are grilling and there is a fire it would be terrible if there is not a system,” she said. “It burns your eyes, it’s hot, and it’s kind of dangerous. So when we built the truck, we knew it was coming, and we got it done.”

Bowles said despite rumors that no other Kentucky cities require this equipment, both she and Chief Kirby stated that was not the case.

“Lexington has it in their requirements but there are so many food trucks and things for their fire marshal’s office to stay caught up with that they are typically only doing complaint-driven inspections right now,” Kirby said.

Co-owner of the Chuck Wagon food truck, Rick Johnson, said while he has mixed emotions about it all, the requirement is a law.

“… It is a law from what I understand,” Johnson said. “It’s just not been enforced here. I do think the timing is bad with it being slow this time of year, but I have talked to the guys at the fire department and they have a valid point, we’ve known about it for several months now.”

Johnson said he and his business partner, Mitch Sanders, plan to install the suppression system.

“It’s going to be a big expense, but I’m not sure what the fines would be, or if you can get a license without it. I’d thought about just doing events in Berea and the county for awhile, but I decided to go ahead and be done with it.”

For more information on the fire suppression requirement, visit nfpa.org or contact the fire department at 623-1164. To view Ordinance 19-24, also known as the food truck ordinance, visit richmond.ky.us.