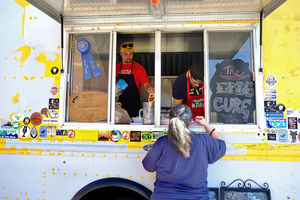 Twice a month, among yellow buses parked outside Waco Elementary School is another big yellow truck omitting cooking tunes and the smells of whatever Chef Josh Gardner felt like cooking up that day.

Gardner has been a chef since he went to culinary school at Sullivan University six years ago and has worked under the “tyranny” of corporate restaurants, he said. However, for the last year, he has had the freedom of the road to serve whatever he wants, whenever and wherever he wants to, from his food truck, named The Epic Cure.

“Freedom to do anything is nix in the corporate world and is nearly impossible in the culinary world. It’s ‛We want it this way, and only this way, and exactly this way,’” Gardner explained. “Being my own boss and coming up with my own menu lets me change things up frequently so I don’t get burned out. It’s flexible. I make my own rules.”

In addition to visiting the elementary school that is located quite a way from any restaurants, Gardner likes to serve outside bars, at family reunions, festivals, and anywhere else he believes patrons might be apt to “dine curiously,” the slogan for his business, he said.

Teachers at Waco Elementary agreed that having options other than frozen dinners, school lunches and gas station snacks are a welcomed treat.

“It’s not just absolutely delicious, it’s the best thing ever for us because of our location. When we only have 25 minutes to eat, having an option that comes to us is amazing,” said Ragan Knuckles, school counselor.

In August of last year, Gardner received a mobile stainless steel kitchen, previously a DHL shipping truck, from a company in New Jersey that specializes in building concession trucks. Every month since, his business has seen gains.

This month, he added, has been the best of all. Not only did Gardner see larger financial returns than ever, he also won an iron chef competition at the Kentucky State Fair on Tuesday.

“It has been a progression and that’s the way it is in the food business. Word of mouth is so important and that takes time,” Gardner said. “This month I nailed it. I grew up going to the state fair, so to be able to participate in it is just surreal to me.”

The competition allowed both Gardner and another contestant 30 minutes to create a main dish and two sides with provided meat and produce. Although contestants were aware of most ingredients that would be available, the were unaware of three wild cards: pineapple, hot sauce, and Froot Loops.

Hot sauce was easy, Gardner said, because he knew that he could marinate steak in it. Pineapple was an ingredient he typically makes into salsa, so he charred it along with plums, shallots and hemp hearts. To add a bit of “crunch,” Gardner explained, he added the Froot Loops to his salsa at the end of his time.

“I don’t know if I’ll make the habit of using Froot Loops in my food, but I’ll know what to do with them if I ever get another mystery basket,” Gardner said, laughing.

Audience members judged each of the dishes and Gardner tied his opponent. The breaker was based on taste points, which Gardner won by a few, he said.

“I got a fancy blue ribbon and a really nice cutting board that says 2015 State Fair Iron Chef Winner on it,” Gardner said. “I enjoyed the spontaneity of it all — where you don’t have any clue what you’re going to do until you do it. That’s a reason I have a truck and that’s just me, I don’t take anything too seriously ever. I’ll live longer that way, I think.”

The awards are currently displayed in the front window of his truck.