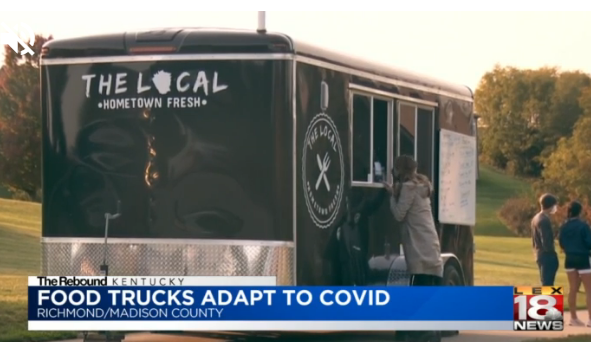 RICHMOND, Ky. (LEX 18) — Many businesses may be struggling during COVID-19, but local food trucks seem to be thriving.

LEX 18 spoke to Richmond food truck owner, Amy Bingham. She started her business in August, which may sound kind of scary starting a business during a pandemic, but she says she’s sold out almost every night.

“We were really surprised by how many neighborhoods reached out and said come set up. Families come up and they order, and it moves fairly quickly, I think that’s why it’s doing so well. COVID is a horrible thing but as far as businesses like this, I think it’s really helped,” said Bingham.

Neighborhoods like Cyndi Hall’s are inviting the trucks in. She says since April she’s asked a new food truck to come out every weekend, giving neighbors a way to socialize from a safe distance.

“I‘ve met people that have moved into the neighborhood that we haven’t met yet, so that’s been kind of fun, and people that we do know just saying hi and keeping our distance but being able to catch up see how everybody is doing, so that’s been really nice,” Hall explained.

She says it also gave her an opportunity to help local businesses that may be struggling by giving them some business for the evening.

“You have to get really creative when people talk about thinking outside of the box. Right now it’s throwing that box out, you know you have to burn that box. You really have to think differently and decide how you can create more business and in a safe way.”

What Cyndi says she likes best about the trucks is you can not only eat outside at your house, but there’s the added bonus of not having to cook or do dishes.

To check out where ‘The Local’ food truck will be you can check out their.