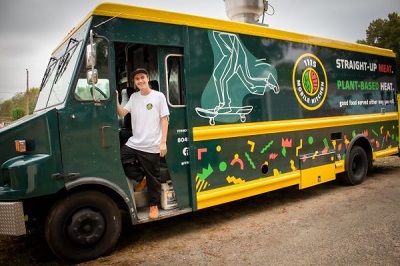 Traditional Southern cooking is about as far from veganism as you can get, but a new local food truck wants to marry the two concepts to create something with wide appeal.

1115 Mobile Kitchen launched earlier this month. In the driver’s seat is Henry Fletcher, who said he’s invested about $100,000 to launch the truck, which is based out of Hatch Kitchen RVA in Manchester.

Fletcher’s food truck serves up a menu of Southern-style favorites like fried chicken and hushpuppies alongside shrimp and salads, with vegan options for items made with meat.

The concept was motivated by Fletcher’s own experiences at concerts and other events, where often it was difficult to find a food truck or restaurant that appealed to both himself and his friends with dietary restrictions.

“A big motivation was hanging out at concerts, festivals and events. When me and my plant-based friend wanted to eat, we couldn’t always get a similar meal,” said Fletcher, who prefers plant-based meals but is willing to eat meat and animal products. “I want to break that barrier.”

Fletcher said his own dietary habits means he has the right background to create a menu that will appeal to vegans and non-vegans. Fletcher has some industry experience through a recent, several-year stint on the crew of Pennsylvania-based food truck Humpty’s Dumplings.

The truck’s numerical name is a reference to a number that Fletcher noticed would regularly crop up in his life; on clocks, in books and it was the address of a house he’d spend time in between skateboarding sessions. In numerology, the number is associated with positive change.

The truck has recently set up for business in Hatch’s food truck corral and Buskey Cider. The truck also plans to make an appearance at Final Gravity Brewing Co. on Sunday.

Another local food truck, Zorch Pizza, is planning to open a brick-and-mortar location in Carytown. Elsewhere in the vegan scene, a vegan bakery and deli plans to open in the former Guitar Works in Carytown early next year.