We already knew McAuliffe maintains a beer-serving device in the Executive Mansion called a Kegerator – and that he pushed to allow ride-sharing services Lyft and Uber to operate legally in Virginia.

Last week, McAuliffe lent his support to another trendy cause when he appeared at a gathering in Tysons Corner to sign a bill eliminating state restrictions on food trucks. 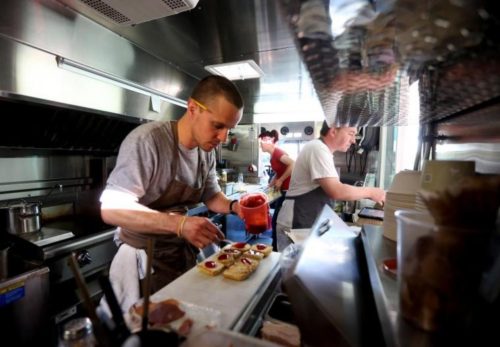 The problem arose in Tysons Corner – an unincorporated area of Fairfax County off the Capital Beltway, home to office high rises, malls and restaurants – after food trucks set up along a road near shops and parking lots, said Eileen Filler-Corn, a state delegate contacted by a food-truck association for help.

She found that food trucks were not allowed to operate on state-maintained roads, although no one knew why. The General Assembly passed her bill to repeal that state regulation.

Localities still determine where food trucks can operate, so in many ways the bill was symbolic. But it sends a message that state lawmakers – and the governor himself – support the trucks. 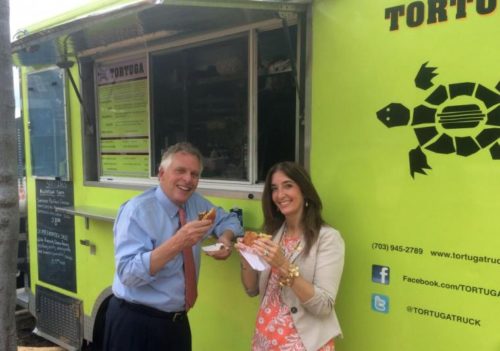 McAuliffe joined Filler-Corn for an event last Monday in which they hailed food trucks and ate lunch, smiling as they posed in front of a truck called Tortuga that sells Mexican sandwiches.

“It makes the community a more enjoyable place to live and work,” Filler-Corn said.

Food trucks typically offer niche cuisines, and in the past few years they’ve popped up around Hampton Roads.

Norfolk and Virginia Beach have both wrestled with their rules on where and when to allow food trucks. Some restaurant owners, fearing the competition, oppose them.

Ross Riddle, 36, who operates Hashi food truck in Virginia Beach and Norfolk, was glad to hear that state officials are supporting the cause.

“It’s a step in the right direction,” he said.

Hashi first set up at the TowneBank building on 21st Street, near the Oceanfront. But zoning officials in Virginia Beach were concerned that the truck was too close to the road. Since then, Riddle has parked his portable kitchen on private property, at breweries, and on Saturdays at the Old Beach Farmers Market.

It’s a seasonal business, for now.

“It’s risky, but I think it’s a great way to start an approach, learning a business and honing an idea,” Riddle said.

“It helps to have the powers that be support those ideas so that you can succeed.”