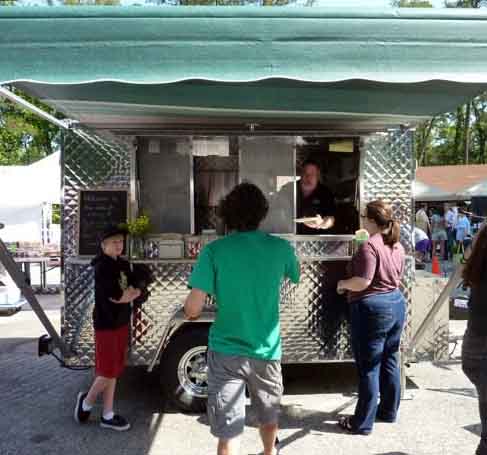 A longtime wine shop owner has taken his wife’s butchery business to the streets.

Two months ago, Henry Reidy launched Meat on the Street, a food cart that serves up grass-fed burgers and breakfast. For 12 years before that, he owned and ran Strawberry Street Vineyard in the Fan. He has since sold the business.

Reidy had the idea to take the butcher shop mobile after he and his wife met with some friends who had a food cart.

Reidy decided to buy the cart from the couple to get a piece of the mobile kitchen action.

After a $20,000 investment, Reidy had Meat on the Street up and running in May. He parks the truck at the South of the James Farmers market in Forest Hill Park on Saturdays and Sundays and at another farmers market on Wednesdays.

Tanya Cauthen said all of the meat for the cart comes from Prospect Farm in Cumberland, one 22 local farms the businesses uses to source its ingredients.

“It’s an opportunity for us to get quality pieces of meat in front of people in a form they understand,” she said.

Reidy said it’s a mob scene on days he takes his cart to the markets, and on most Saturdays they see about 150 people.

Reidy said the grass-fed burger is by far the most popular and most talked about order.

“What you get in the supermarkets is Midwestern grain-fed beef,” he said. “It’s bland and unexciting. The grass-fed burgers have a richer, more intense flavor,” he said.

“Nobody in town is doing that,” he said.

In addition to the farmers markets, Reidy said he and his wife have been taking the truck to First Fridays and private parties.

“I’m exploring and doing some research on different lunch spots,” he said.