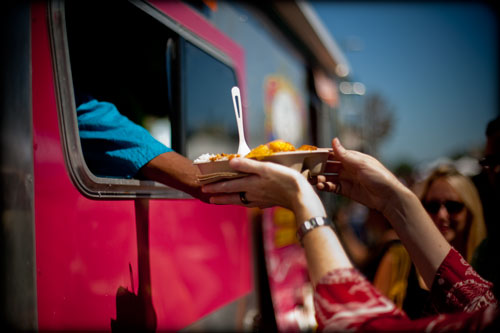 It’s safe to say that culinary Washington pays more attention to Twitter feeds announcing food truck locations than to Department of Consumer and Regulatory Affairs regulatory dumps. But last Friday’s release of proposed new vending rules may have been an exception.

The new regs—the subject of two years of debate—were supposed to help settle the rules for the burgeoning population of food trucks.

For truck operators, it’s a moment of truth: Will D.C. develop the sort of dynamic four-wheeled culinary culture that marks cities like New York, Portland, and Los Angeles? At least 35 trucks now operate here, serving everything from Spam sushi to alligator cheesecake. But much of the city remains dominated by sidewalk vendors whom city regulations essentially force into serving nothing but hot dogs.

For traditional restaurants, the issue is just as crucial: Brick-and-mortar eateries see even the food-truck status quo as profoundly unfair to businesses that spend money on storefronts, subsidize neighborhood business districts, and pay taxes.

Both sides lobbied to change an aging set of provisions that wasn’t really created with Washington’s expanding fleet of 21st-century nomadic nosh spots in mind. Deep-pocketed organizations including the Restaurant Association Metropolitan Washington, the Golden Triangle Business Improvement District and the Apartment and Office Building Association of Metropolitan Washington pushed for tighter restrictions. The truckers, meanwhile, formed their own advocacy group to lobby for greater entrepreneurial freedom.

When the rules finally arrived last week, there was little sense that the issue was actually resolved. Kristi Whitfield, executive director of the D.C. Food Truck Association, calls the new regs “a huge improvement,” but says there’s still room for improvement. Restaurant Association representative Andrew Kline says “it’s a good start,” but adds that it “satisfies nobody’s needs.” Neither side is done arguing: The process allows another 30 days of lobbying before the D.C. Council votes on the regulations.

With neither Kline nor Whitfield claiming victory, here’s a quick analysis of who won and lost in this latest skirmish in the food-truck wars.

Issue: Where can food trucks park?

Old rule: Trucks can occupy virtually any legal parking space—even right outside a competing restaurant. Traditional restaurants hate this: While brick-and-mortar establishments must survive a gauntlet of regulatory and community approvals, their competitors can simply pull up to the curb. Truckers wanted change, too, hoping to see vendor parking passes that would help them avoid costly parking tickets.

New rule: The trucks can still park in any legal spot—but they also have to keep feeding the meter and observing posted time limits, and face tickets when they don’t.

Who wins: Food trucks—for now. The trucks maintain their greatest assets, mobility and the ability to respond to customer demand. But this could change: The new regs also allow for the creation of “vending development zones,” which could lead to mandatory vending locations in designated areas. Whitfield worries that certain neighborhoods could become “food truck free zones” under that change. Kline, meanwhile, believes city laws require the designation of specific vending locations no matter which neighborhood.

Old rule: No. The District enforces the “ice-cream truck rule,” which says vendors can only pull over where customers are already gathered (it’s why ice-cream trucks play jingles). For decades, the rule made things tough for mobile vendors of foods more complicated than frozen Good Humor treats, until Twitter offered a way to assemble a crowd in advance. But still, the trucks wanted change: A customer who hails a truck via Twitter (“I’ll be there in five minutes!”) doesn’t count under the existing rule. If no others are waiting, the truck can’t stay.

Who wins: Food trucks. The new rules better fit the way modern eats mobiles operate, even if the discrepancy between types of vendors seems unfair to dessert purveyors. (The logic is that savory trucks need more time to prepare food in their vehicle.)

Old rule: 10 p.m. on weekdays, 1 a.m. on weekends. Truckers wanted to change this, since the existing rule effectively prevents them from serving late-night crowds in bar-heavy areas like Adams Morgan. Restaurants there are happy with the status quo since folks on the street after last call are good for business.

Who wins: Restaurants. “We thought that food trucks on the street as bars are clearing out and drunk people are stumbling out onto the street would be a great sort of midpoint to…get a little food into people,” Whitfield says. Now, those besotted eaters remain a captive audience for brick-and-mortar eateries.

Old rule: No. Truckers pony up a flat $1,500 annual payment in lieu of taxes. This infuriated restaurant operators, who pay 10 percent in taxes, not to mention BID fees that subsidize things like disposing of the garbage that food truck patrons leave in public trash cans.

Who wins: Food trucks. Not only are their taxes not going up, but the regs’ new employee licensing procedures effectively make it cheaper to staff a truck, since they no longer require every worker onboard to be a fully licensed vendor.

In the end, of course, food truck regulations are one thing—and food-truck politics are another. Like so many issues in the District, this one involves a new question that’s most energetically supported by comparatively cosmopolitan newcomers: Why can’t our food trucks be as cool as L.A.’s? And it also involves a degree of anxiety on the part of both vested old interests (restaurants employ an estimated 47,000 people in the District) as well as people accustomed to older Washingtonian folkways (those street-vendor half-smokes so frequently disparaged by food truck fans, after all, are a local tradition).

In wading into the issue, the Gray administration risked looking like either the enemy of culinary progress or the foe of established local businesses. A week later, with no major explosions by either side, it appears the mayor’s team has played the politics well. That’s a win, too.