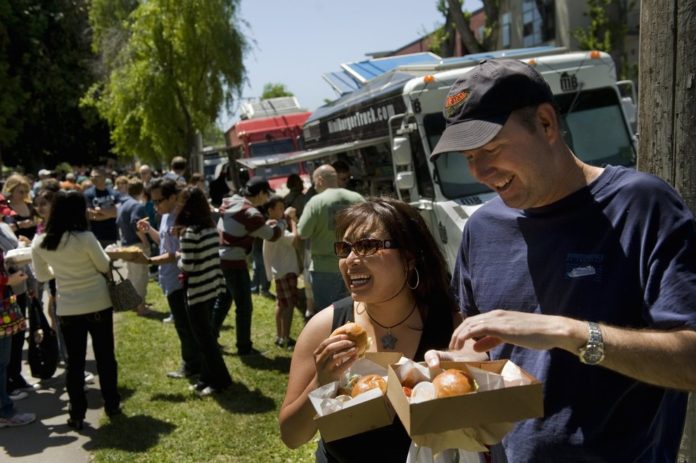 The critical mass of food trucks known as SactoMoFo is back this Saturday, this time under the freeway at W and Eighth streets, a space known well to foodies who frequent the Sacramento Farmers’ Market.

The event was originally scheduled as an ambitious, indoor food and brewfest at Power Balance Pavilion, but was moved when it became apparent that 30-plus trucks could not be massed in the arena, said SactoMoFo coordinator Paul Somerhausen.

Saturday’s gathering will be the third such event in the city. The first, last April, drew roughly 10,000 to Fremont Park, causing diners to complain of lunch line gridlock. This time the crowds are expected to be much smaller, given the cooler weather and the cement-bound location.

“We won’t have the crazy lines that we had in April,” Somerhausen said.

In total, there will be 24 mobile food vendors – Chairman Bao, Mini Burger and Drewski’s Hot Rod Kitchen, Heavenly Dog, Coast to Coast Sandwiches and San Francisco-based Japa Curry among them.

The event is as much a form of advocacy as it is a culinary moment. The food truck industry has been waiting for the city to revisit what it considers draconian regulations that include forcing food trucks to move after 30 minutes parked on a city street, as well as a 6 p.m. curfew in winter.

“We want to show that if we have regulations that are reasonable and fair we can have all those kinds of trucks here in Sacramento,” said Somerhausen, adding “In Sacramento, we only have four or five trucks that are not taco trucks.”

The City Council was due to take up the food truck regulations in early November but postponed any action to next year. It was not the first postponement.

As they wait for the city to act, food trucks are using Facebook and Twitter to let customers know where they will park to maximize the half-hour curb time.

Davin Vculek, owner of Mini Burger, said: “We’ve been waiting on the city for months. This limits the growth of the established trucks and any new ones.”

Despite the limitations and uncertain future, Vculek has another Mini Burger truck in the works.