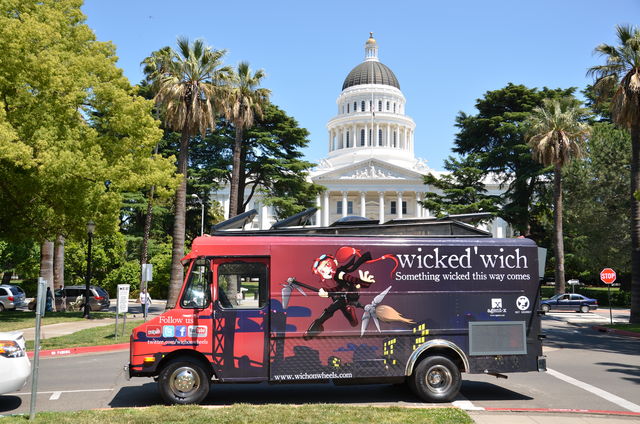 The Wicked ’Wich, as owners Tom Boerner, Chuck Hewitt and Chris Jarosz have dubbed their sandwich shop on wheels, has been in the planning stages for more than a year now and is finally ready to hit the streets.

Each wicked sandwich, which includes a customer’s choice of meat, cheese, mild and spicy “potions” (condiments) and locally sourced produce, will be topped with crisp French fries and a heap of non-mayonnaise-based, house-made coleslaw that Jarosz described as “tangy, yet sweet.”

The sandwiches are inspired by a popular East Coast restaurant that Jarosz frequented in his youth. Though he is keeping mum on the name of the restaurant, Jarosz said he has a hunch customers will catch on to the culinary reference.

Customers can choose between both American and imported meats and cheeses. The menu is still being firmed up, but Jarosz recommends the Hot Italian sausage from locally owned Orangevale Meat Shoppe and the Spice Capicola from Italy with provolone cheese.

The final product will be “stacked very high” and housed within two slices of homemade white bread cut from loaves made specially for Wicked ’Wich by Grateful Bread on Fair Oaks Boulevard, Jarosz said.

Jarosz described Wicked ’Wich’s fare as “a blue collar, working man’s sandwich,” with prices between $7 and $8.

Though the owners have their own recommendations as far as flavor combinations go, they said they want to let Sacramento decide the truck’s official menu item sandwiches.

“Our menu will evolve based on the feedback of our patrons,” Jarosz said.

The truck will accept both cash and credit forms of payment and offer a basic drink menu, consisting of popular sodas and energy drinks.

Jarosz indicated that in the beginning, the three partners will run the truck themselves but are currently searching for cooks and cashiers to help in the future.

In addition to making themselves available in downtown, Jarosz said Wicked ’Wich plans to expand its reach and make stops in Elk Grove, El Dorado Hills, Roseville and Granite Bay.

“Food trucks allow you to bring your passion to people, rather than trying to get them to come to you,” he said.

Wicked ’Wich combines the trio’s 30 years of food industry experience with its background in marketing and promotions to create something that Jarosz said will combine both of the team’s passions: food and entertainment.

In addition to mile-high sandwiches, the Wicked ’Wich aims to draw attention with its garish appearance.

Gearhead Garage on Roseville Road installed LED screens, exterior speakers and an electrical outlet – with the intention of plugging in DJ equipment and potentially providing music for outdoor events.

Gearhead also gave the truck a paint-job makeover, plastering on its side a larger-than-life graphic of the restaurant’s spokeswoman: a youthful, raven-haired witch on a technologically advanced broom.

Jarosz described the mascot as “mischievous” and said he hopes her image will contribute to the truck’s identity and overall visibility.

“Just like McDonald’s has the Hamburglar, we have the witch,” he said.

Though Wicked ’Wich may seem flashy by food truck standards, Jarosz said it has no intention of outshining anyone. He said he thinks it’s “incredible” that food trucks in Sacramento have been so successful, considering the difficulty of working around city regulations,  and wants to see them continue to be viable.

Jarosz said Wicked ’Wich aims to work with other trucks in the area to generate more business for everyone and create what he described as a “mini food court” in downtown.

Andrew Blaskovich, owner of another Sacramento food truck, Drewski’s Hot Rod Kitchen, echoed Jarosz’s sentiments, indicating that he has already spoken with the owners of Mini Burgers and Chando’s Taco’s about forming an alliance of sorts.

Blaskovitch said uniting with other trucks and creating a “food court” formation would have a similar effect to that of SactoMoFo, where 10,000 people were drawn to Fremont Park by the promise of a variety of food trucks parked side by side for several hours. He added that grouping together would bring more publicity to “what people want,” in other words: food trucks stationed for longer than 30 minutes.

Blaskovitch cited food trucks as being a source of liveliness for the city, noting that they increase foot traffic and give people a reason to be outside.

“Sacramento is a ghost town on Sundays, but trucks keep people physically on the streets and sidewalks,” he said.

In addition to potential inter-truck relations, Jarosz said he would also like to see common ground be reached between food trucks and brick-and-mortar establishments. He said he believes that food trucks actually bring foot traffic to the areas around restaurants, therefore increasing businesses for both parties.

“Sacramento has grown 250 percent culturally in the last 10 years,” he said. “There is a natural progression toward food trucks being viable in Sacramento.”

Jarosz said the Wicked ’Wich should have its final inspection completed within the next few days and be ready for a soft opening early next week – but don’t expect a personal invitation.

Jarosz said he and his partners want to impress people right away with their speedy service, and advertising their debut may infringe on that aspiration by drawing too large a crowd.

“We’re just going to stay underground and pop up,” he said.

He added that the cart hopes to cater to those people who may only have a 30-minute lunch break and therefore can’t afford to waste time locating a food cart and waiting in its line.

To alleviate the frustration of wasted lunch breaks, Jarosz said the Wicked ’Wich will have a set schedule posted on its website within the next few weeks indicating when and where it can be found from week to week. He said they will also use Twitter to alert patrons as to when they will be on the move.