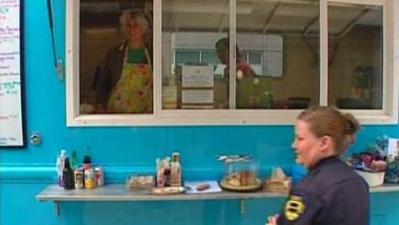 SALT LAKE CITY— Mobile food trucks are becoming a trend in Salt Lake City, but where they park and for how long has become a problem.

After a year of parking behind the Gallivan Center with a nearby businesses’ permission, SuAnn Chow, owner of the Chow Truck, was told by the city she had to keep moving.

“Currently within the city limits the ordinance states that there is a limitation of two hours which is why I locate my truck, I move two to three times a day,” says Chow.

And the Chow Truck’s loyal customers always follow. But with new mobile cafes like the Torta Truck opening, the city saw a need.

“We don’t have an ordinance that necessarily addresses their needs to operate as a business,” says Salt Lake City’s small business liason Jessica Thesing.

While Salt Lake City revises zoning ordinances for mobile food trucks, the city is sponsoring a food truck street fair. The street behind the Gallivan Center will close to traffic but open to food trucks for four hours.

“It offers them enough time to operate and enough time for us to review the ordinance,” Thesing says.

There’s a limit of five mobile restaurants at the fair, for now.  Newcomer “So Cupcake” plans on taking advantage of the event. Owner of So Cupcake, Natalie Jensen says its an opportunity for the public to learn about food trucks.  Jensen says “to start getting us all together so people know who we are know who is out there its really good and will help it grow.”

Thursday’s food truck fair will continue through the summer.

The city hopes to take public input and revise zoning for the trucks within a couple of months.